You should not be surprised by Savingtoyou because this adware application comes from a big family of semi-random name adware programs. Due to its affiliations we know exactly what to expect of the app. It should be pointed out that Savingtoyou is not a dangerous computer infection, and yet it would be a lot better if you removed it from your PC. You can uninstall Savingtoyou via Control Panel as this application comes with an entry on the list of installed programs. To be sure that your PC is safe, scan it with a reliable antispyware tool.

As it has been mentioned in the first paragraph, Savingtoyou is part of a big group of adware applications. It is practically identical to Ultra Coupon, RocketCoupon, QueenCoupon and other similar programs. Since it is a semi-random name adware, Savingtoyou can generate its name in a different way each time it enters a new target system. Thus, the name on the list of installed programs could be savingToyou, SAvIngotOyou, savvingttoyOU, saavingtoyoou and so on and so forth. However, the difference in names does not mean that it is a different program. It is still Savingtoyou.

This application is very similar to many other adware programs because it has a fake homepage. The website itself does not try to impersonate anything, but we can call it fake because it does not have a direct download link. The website simply says that with Savingtoyou you get can the “best deals from all your favorite shopping sites, giving you the advantage of comparing item prices, deals and promotions from different shopping sites.” It would be great if it were true, but, unfortunately, we cannot be guaranteed that the information provided by Savingtoyou is reliable.

As the direct download for Savingtoyou is unavailable, this program usually arrives bundled with other potentially unwanted applications in bundles. It may be distributed by several installers, including InstallRex, Vittalia and Amonetize. In order to avoid betting infected with Savingtoyou, you should refrain from downloading software from torrent or p2p websites. If you are not careful enough, you might end up installing a lot of adware applications because these websites always support commercial ads as they need to survive somehow.

To remove Savingtoyou from your system, open Control Panel and uninstall it manually. Take note that you might need to delete the extension from Mozilla Firefox and Google Chrome separately, because the general removal does not work on these browsers. Eventually, you should scan your system with SpyHunter free scanner. Savingtoyou seldom travels alone, so if you have more unwanted applications on board, you will do yourself a favor by removing them all at once.

Remove Savingtoyou from your browser

Download Remover for Savingtoyou *
*SpyHunter scanner, published on this site, is intended to be used only as a detection tool. To use the removal functionality, you will need to purchase the full version of SpyHunter. 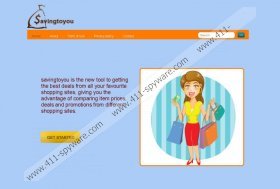