It would seem as though the developers of rogue antispyware applications like Personal Shield Pro, MS Removal Tool, Essential Cleaner and System Tool have been hard at work on their latest rogue, Protect Shield. This rogue antispyware application was designed with the same malicious intent of its predecessors, only with more sophisticated infection capabilities. Despite what Protect Shield would like its victims to believe, this rogue does not have the ability to detect or remove any type of threat from the system.

Protect Shield enters the system surreptitiously and hides its presence from the user until such time that it is ready to start its attack against the system. This will start by users being spammed with fake security system scans which profess to report on numerous critical security threats being present on the system. The fake scan will also urge the user to purchase Protect Shield.

Shortly after this the user will find himself presented with numerous falsely generated security messages in the form of pop up messages. These fake pop up messages are designed to further panic the user into thinking that his system is being attacked. Users are urged never to believe any correspondence received from Protect Shield.

Other symptoms associated with Protect Shield include blocked Internet connections and poor system performance. Users have also complained about being unable to launch executables on the infected PC. This is done in an effort to prevent the user from running or downloading an application which can detect and remove Protect Shield from the system.

Limit the damage this rogue application will be able to do by using a genuine security tool to permanently erase Protect Shield from the system. This will also protect your system against similar attacks.

Download Remover for Protect Shield *
*SpyHunter scanner, published on this site, is intended to be used only as a detection tool. To use the removal functionality, you will need to purchase the full version of SpyHunter. 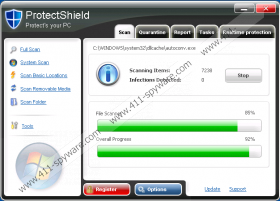