Personal Guard 2009 is yet another Internet scams. Pretending to be a spyware removing tool, this fake application has one primary objective: to scare its victims into purchasing its "licensed" version.

Personal Guard 2009 fake anti-virus typically runs each time you log onto Windows and will display its fake security scanner that claims to find a bunch of corrupted dangerous files. Unsuspected users easily believe that in order to protect their Operating System against these “detections”, they will be prompted to install Personal Guard 2009 full commercial version which of course demands payment.

If you paid and installed Personal Guard 2009’s licensed software, you will soon find out that it’s not only worthless in terms of spyware removal, but it affects any computer systems’ performance and will eventually slow down the computer considerably.

One should remove the Personal Guard 2009 rogue anti-virus as soon as it has been detected.

Download Remover for Personal Guard 2009 *
*SpyHunter scanner, published on this site, is intended to be used only as a detection tool. To use the removal functionality, you will need to purchase the full version of SpyHunter. 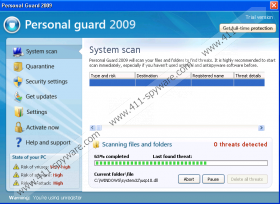