PC Defender Plus is a fake security application, which mimics legitimate antispyware tools, found in protected Windows systems. Cyber crooks, who stand behind this cunning program, have made the bogus tool look very similar to the true malware removal products, so it is no surprise that thousands of computer users have fallen for the scheme, or might fall for it in the near future. If not disclosed and deleted, PC Defender Plus releases bogus computer scanner reports and hundreds of fake security notifications, all rushing to trust the rogue and buy its full version, allegedly capacitated to remove all type of malicious infections.

It might be a mystery to many Windows users how PC Defender Plus infiltrates and starts processing in their computers unnoticeably, but all the credit should go to hackers, who work relentlessly to detect and implement every security loophole and crack there is. If your computer is not protected by strong, up-to-date security programs, then malicious applications will have no trouble getting in via bundled downloads, fake video codecs, or any similar channels. This is why it is superbly important that you protect your operating Windows system with legitimate antimalware software right away! This would protect your PC against fake computer scanners, bogus notifications and various system dysfunctions, which could go into effect once PC Defender Plus is activated.

PC Defender Plus is highly deceitful, and you should not believe one notification or pop-up alert coming your way during this fake security application’s existence, as all misleading information is meant to trick you into paying money for a bogus and completely useless rogue’s full version, malware removal application. This licensed product could not delete malicious applications or guard your system against incoming threats; so, install the real deal software and remove PC Defender Plus from your computer for good!

In order to make you pay money for this program, PC Defender Plus displays various fake security notifications. Some of them are as follows:

Attention: Danger!
ALERT! System scan for spyware, adware, trojans and viruses was finished. PC Defender Plus detected 99 critical system objects. These security breaches may be exploited and lead to the following:
* Your system becomes a target for spam and bulky, intruding ads
* Browser crashes frequently and web access speed decreases

As you can see, PC Defender Plus makes it look as though the computer is infected with such threats as Trojan.JS.Fraud.ba or Hoax.HTML.OdKlas.a. However, these messages are just an elaborated play devised to push you into paying 78.45 USD. Naturally, paying your money for this product is something you should never do. Instead of suffering this infection, we recommend removing PC Defender Plus with the featured antimalware application. Automatic removal will also ensure that your system is safeguarded against other threats.

Download Remover for PC Defender Plus *
*SpyHunter scanner, published on this site, is intended to be used only as a detection tool. To use the removal functionality, you will need to purchase the full version of SpyHunter. 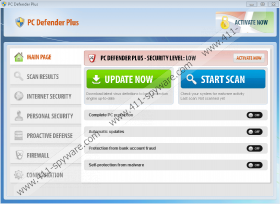 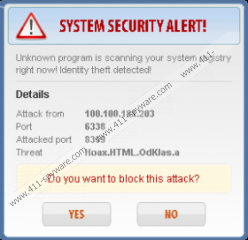 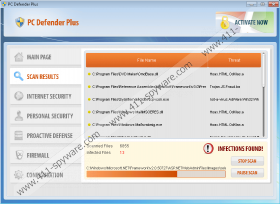