If you have noticed numerous third-party ads and annoying pop-ups within your web browser, it is a significant indication that an adware program is active on your PC. Number Ascend is one of the newest adware programs that have been developed by the notorious SuperWeb LLC group. Just like any other adware program of this family, Number Ascend should be removed once it has been discovered on your PC. While Number Ascend is advertised as an excellent tool, which should improve your web browsing experience, you should known that in reality Number Ascend does nothing like that. Make sure to remove this useless application as soon as possible as it holds no beneficial values whatsoever. Use the removal guide provided below and delete Number Ascend once and for all.

In most cases, Number Ascend is distributed via bundled installers as it is impossible to download this worthless application from its official website. In order to reduce the risk of getting your PC infected with Number Ascend in this way, you should take a few preventative steps. Avoid third-party download websites and websites associated with online piracy as they tend to host software bundles, which usually contain numerous third-party unwanted programs. Most importantly, every security conscious user should have a professional antimalware tool active on your PC at all times, as it provides system security at all times. By practicing safe browsing habits along a professional antimalware tool, you will make your operating system virtually unbreakable.

Number Ascend does not differ all that much from other adware applications developed by the SuperWeb LLC group. As soon as this adware program gains access to your operating system your web browser will be flooded with various third-party commercial ads and pop-ups. It goes without saying that this activity will make your life miserable as you will be forced to fight through worthless ads and pop-ups every single time you browse the web. This intrusive activity will not go away simply as the only way that I can be stopped is by executing a complete removal of Number Ascend. Use the removal guide below and delete this adware in a quick and easy manner.

The removal procedure is rather simple as you can delete this intrusive adware program via Control Panel. In most cases, the intrusive activity will stop. Unfortunately, it has been noticed that in some cases traces of Number Ascend were found active even after manual removal was executed. Make sure to scan your PC with a professional antimalware tool in order to make sure that every single bit of Number Ascend was removed.

How to remove Number Ascend fro your PC

Download Remover for Number Ascend *
*SpyHunter scanner, published on this site, is intended to be used only as a detection tool. To use the removal functionality, you will need to purchase the full version of SpyHunter. 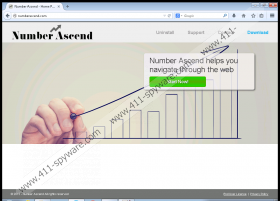