The message not only informs users that their files are encrypted and states the sum that has to be paid (0.1 Bitcoins), but also helps users to buy Bitcoins, tells how to send them step by step, and warns that the use of third-party decryptors or antimalware tools will result in the deletion of all the files. It says that this will happen if a user decides to contact the Police or FBI as well. Unfortunately, there are no guarantees that you will gain access to your files after you make a payment to cyber criminals too, so you should think twice whether you really want to pay them. Do not worry; there is a way to gain access to the encrypted files without paying money. Specialists say that you can easily restore your files from a backup. If you do not have one, there are, unfortunately, no other ways to do that at the time of writing.

Researchers who have tested NanoLocker Ransomware have also observed that this infection will put two files on the desktop: Decryptor.lnk and ATTENTION.RTF. The first file opens lansrv.exe located in C:\Users\user\AppData\Local, whereas the second one contains the same information that can be found in the screen-sized message. As can be seen, NanoLocker Ransomware wants that you know what you have to do next. Moreover, it has been observed that NanoLocker Ransomware will also add the LanmanServer value to be able to start together with Windows. In other words, it will not disappear after you restart your browser. This value can be found by following this path HKEY_CURRENT_USER\Software\Microsoft\Windows\CurrentVersion\Run.

Thousands of users cannot understand how NanoLocker Ransomware has managed to slither onto their computers. The explanation is, actually, rather simple. It has been found that this ransomware infection is mainly spread through infectious email attachments. Do not open any attachment if you are not sure that it is good and sent by a sender you know. Security specialists also say that this threat might enter your system after you click on a bad link or some kind of ad placed on a suspicious web page. Last but not least, other malicious programs existing on your PC might have downloaded NanoLocker Ransomware on your system as well. You should be very cautious in the future in order not to encounter NanoLocker Ransomware or a similar infection. In addition, it would be really clever to install a security tool on the system and enable it.

Delete NanoLocker Ransomware from my PC

Download Remover for NanoLocker Ransomware *
*SpyHunter scanner, published on this site, is intended to be used only as a detection tool. To use the removal functionality, you will need to purchase the full version of SpyHunter. 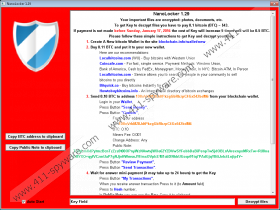