With so many fake security applications doing the rounds these days, it has become increasingly more difficult for users to distinguish between genuine applications and malicious applications like MyPCSecure. The developers behind this rogue antispyware application, which forms part of the Wini family of rogueware, was designed not to be of value to any PC but instead to merely rip consumers off.

MyPCSecure enters the system surreptitiously, and will hide its presence from the user until such time that it is ready to start its attack against the system. This will usually be heralded by the rogue initiating a fake system scan which will inevitably yield bogus results. These fake scan results will be used to panic the user into thinking his PC is under attack, and that he needs to pay for MyPCSecure in order to stave off this attack. Shortly following this, MyPCSecure will start spamming the user with numerous fake security alerts in different languages, depending on the operating system of the user:

English Alert:
Spyware Alert!
Your computer is infected with spyware. It could damage your critical files or expose your private data on the Internet. Click here to register your copy of MyPCSecure and remove spyware threats from your PC.

Symptoms reported from this rogue application range from users being unable to launch applications on the infected systems to blocked Internet connections. Users have also complained about extremely poor system performance, this is due to MyPCSecure consuming many valuable system resources. Increased erratic system performance has also been reported.

In order to limit the damage this rogue will be able to cause your PC remove MyPCSecure permanently with the help of a genuine security tool. This will also protect your PC against similar attacks in future.

Download Remover for MyPCSecure *
*SpyHunter scanner, published on this site, is intended to be used only as a detection tool. To use the removal functionality, you will need to purchase the full version of SpyHunter. 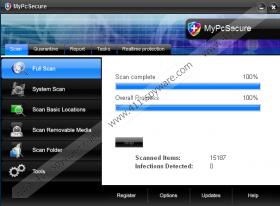