If you are looking for a user friendly and powerful security tool to complement your PC’s security, then you are well advised to steer clear of McAVG 2011. This rogue antispyware application was designed not to protect your PC against any type of threat, but instead to act as a vehicle with which vindictive cyber criminals rip honest consumers off.

McAVG 2011 enters the system surreptitiously through the help of various nefarious techniques. These vary from infected online flash ads to bogus online malware scanners. As of late it has also been reported that McAVG 2011 makes use of seditious browser hijacking websites. These browser hijackers forcefully redirect users to compromised landing pages where the McAVG 2011 infection is secretly rooted into the PC. They also offer an online payment portal where users are referred to in order to purchase McAVG 2011. Some of the McAVG 2011 browser hijacking sites is listed as follows:

Other symptoms associated with McAVG 2011 include users being unable to connect to the Internet, as well as the inability to launch applications on the system. This is done in an effort to prevent the user from running or downloading an application which may be able to detect and remove McAVG 2011 from the system.

Download Remover for McAVG 2011 *
*SpyHunter scanner, published on this site, is intended to be used only as a detection tool. To use the removal functionality, you will need to purchase the full version of SpyHunter. 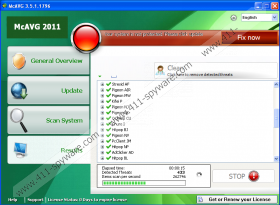