MaxAntiSpy is just one of the many fake anti-virus programs, cloaked and advertised as legitimate products. With the help of other malware pieces such as the famous Zlob Trojan, the rogue sneaks into computers and prompts users to purchase its bogus licenced version.

Unlike most other phony AV applications, this one mostly counts on users' participation, because, in most cases, the infection is transmitted via online scanners. Clicking on the scanner downloads the so-called trial version of MaxAntiSpy. It is highly advisable that you avoid clicking on online scanners provided that they advertise a suspicious product. It is always a good idea to check online whether it is a legitimate one or a fraud.

The other method for transmitting MaxAntiSpy is the usage of the Zlob Trojan. It is mostly hidden in fake video codec installers and is ready to attack any vulnerable computer, provided that its user tries to download the malicious codec.

When the trial version of MaxAntiSpy is inside the machine, it immediately starts producing fake alerts and notifications, warning about non-existing security threats. What follows is the bogus scanning tool of the program. This time hackers have not been so crafty when creating the interface and it does not seem as genuine as the interface of other rogues. However, it still manages to trick unsuspecting users by scaring them with all the phony alerts and scans. With every warning and after each scan, MaxAntiSpy urges the victim to buy its licence by promising that the licenced version will remove all viruses from the system.

To sum up, MaxAntiSpy is not genuine anti-virus software. It is a great scam via which hackers attempt to gain profit. Though its false warnings might seem scary, the only thing that you should be scared by is MaxAntiSpy. Use a legitimate AV tool and remove this fraudulent program immediately.

Download Remover for MaxAntiSpy *
*SpyHunter scanner, published on this site, is intended to be used only as a detection tool. To use the removal functionality, you will need to purchase the full version of SpyHunter. 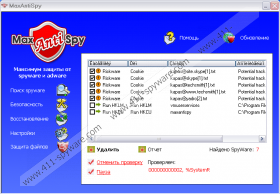