MalwareAlarm is nothing but a fake anti-virus program which aims at misleading unsuspecting users into spending money on its bogus full version.

There are several tactics that the villain uses in order to enter vulnerable machines. To start with, compromised websites are the ones to carry the infection and Trojans are the ones to deliver it into the computer. Mere clicking on such a hacked website is enough to trigger the Trojan. It does not seek permission or ask for authorization – it hides itself deep into the system and makes room for MalwareAlarm. Once the rogue settles into the PC, it starts using various mischief strategies to make the victims belive their computers have been seriously affected by numerous malware pieces. For this purpose, MalwareAlarm constantly produces phony alerts and notifications warning users about non-existing threats and viruses.

What follows after the first few warnings is the scanning tool. It is as bogus as everything else evoked by MalwareAlarm – all it does is to present a preliminary list of presumable infections. Though the interface of the program might appear legitimate to some of you, it is a fact that this application cannot detect or remove any infections – it is malware itself. However, MalwareAlarm assures its victims that it is capable of removing all the viruses found by its scan if they purchase MalwareAlarm – full version. This leads to a fake webpage that requires the user's personal and credit card details. Some users hesitate at first, but the constant pop-up alerts convince them to pay for the software.

It goes without saying that buying MalwareAlarm is not going to solve any computer problems that you might have. It is just a scam by which hackers try to gain profit. Use a legitimate anti-virus software and remove the rogue immediately in order to avoid further troubles.

Download Remover for MalwareAlarm *
*SpyHunter scanner, published on this site, is intended to be used only as a detection tool. To use the removal functionality, you will need to purchase the full version of SpyHunter. 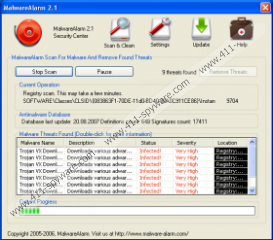