Internet Security 2014 is a malicious fake anti-spyware tool which has been created by the schemers of the clandestine Rogue.WinPCDefender family. The strength of the infection is its fictitious and misleading interface which has been developed using the well-known Windows, Firewall and other logos. Even though these misguiding attributes may create an illusion that you can trust the program running on your personal computer – you certainly need to remove it. Of course, the first question you should ask is how the application entered your Windows system. If you have downloaded it yourself – there is no doubt that the source was corrupted. Note that the threat could also be proliferated using spam email attachments, social engineering scams, bundled downloads and similar security loopholes. Without a doubt, this is a signal that you should delete Internet Security 2014 from your personal computer.

As mentioned before, the malicious rogue comes from a family of malicious rogues. Some of the most recent predecessors include Smart Security and Privacy Protection, both of which require immediate removal. All of these fictitious anti-spyware programs share the same grey/black interface and the same goal, which is to trick you into giving up your money. Since the program looks like an authentic security tool, you may think that there is no harm in paying the requested sum of money for its full version. Unfortunately, the rogue cannot delete malware and is completely useless. In fact, it even cannot detect malicious programs, which is why you should pay no attention to the infections listed by the Full PC Scan. Additionally, you should ignore any pop-up notifications asking you to activate the fake AV’s full version:

Warning
Your PC might be at risk
Activate the software to protect it.

It is also important that you do not panic once you notice various Windows dysfunctions stopping you from proceeding with Internet Security 2014 removal. These dysfunctions can be eliminated as soon as you delete the malignant rogue from your personal Windows system. And how exactly should you remove the malicious application? In case you are experienced with the manual removal tasks, you can get delete the infection on your own. However, this is not recommended if you have never dealt with malware before. If you make any mistakes, your PC and Windows security could be disrupted even further. Therefore, we recommend that you install automatic spyware removal software to delete Internet Security 2014 instead. Do you have any more questions or concerns regarding the removal procedures? Post a comment below.

Download Remover for Internet Security 2014 *
*SpyHunter scanner, published on this site, is intended to be used only as a detection tool. To use the removal functionality, you will need to purchase the full version of SpyHunter. 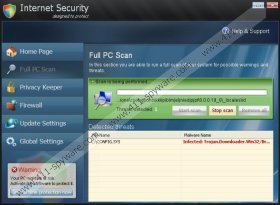