If you wonder how this malicious rogue manages to gain entry to your PC, it makes use of various nefarious techniques. These include using bogus online malware scanners, bundling its Trojans and malware together with other third party downloads and using seditious browser hijacking websites.

Once Internet Security 2011 manages to root itself in the system it will not let up until the user either decides to pay for it, or remove Internet Security 2011 from the system completely. It will start its attack against the system by initiating a fake system security scan. Of course this fake scan will generate false results which have no bearing on reality. Shortly after this, the user will be presented with various falsely generated security alerts in the form of annoying and incessant pop up messages. These fake pop up messages were designed to further annoy and panic the user into thinking his system is under attack. Some of the most popular notifications to be on the lookout for include the following:

Attention! Network attack detected!
Your computer is being attacked from remote host. Attack has been classified as Remote code execution attempt.

Attention! Threat detected!
NOTEPAD.EXE is infected with Trojan-BNK.Keylogger.gen
Private data can be stolen by third parties including card details and passwords.
It is strongly recommended to perform threat removal on your system.

Windows Security Alert
Your computer is making unauthorized copies of your system and Internet files.
You should immediately run full scanning of your system to prevent any unauthorized access to your data.
Click YES to run Antivirus scanner right now.

Download Remover for Internet Security 2011 *
*SpyHunter scanner, published on this site, is intended to be used only as a detection tool. To use the removal functionality, you will need to purchase the full version of SpyHunter. 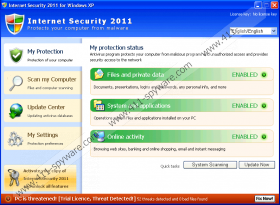