It would seem as though the developers of hotly detested File Secure and Malware Bell have been hard at work developing and distributing their latest malicious rogueware, IE Antivirus 3.2. This rogue antispyware application is distributed via fake online malware scanners, and by bundling its Trojans and malware together with other third party downloads. It is also majorly distributed through a Trojan installed on the PC as an Internet Explorer browser helper object (BHO).

This browser helper object manipulates search engine queries in order to insert their own results into the search engine’s result page. Another symptom of this Trojan is to display bogus security alerts which will prompt the user to download and buy IE Antivirus 3.2. Once IE Antivirus 3.2 is securely rooted in the system it will initiate a fake system scan which will invariably yield many infections as being present on the system.

Of course IE Antivirus 3.2 will claim to be able to remove these falsely reported threats, but only once the user pays for and activates IE Antivirus 3.2. Other symptoms associated with this rubbish rogue application vary from blocking users’ access to the Internet to not allowing them to launch applications on the infected PC. This is done in an effort to prevent the user from running or downloading an application which may be able to detect and remove IE Antivirus 3.2 from the system. Poor system performance and increased erratic system behavior has also been widely reported.

This rogue application will not benefit your PC in the least. Limit the damage it will cause and annihilate IE Antivirus 3.2 before it is too late. This is best achieved by making use of a properly functioning security tool which will not only erase IE Antivirus 3.2 but also protect against similar future attacks in future.

Download Remover for IE Antivirus 3.2 *
*SpyHunter scanner, published on this site, is intended to be used only as a detection tool. To use the removal functionality, you will need to purchase the full version of SpyHunter. 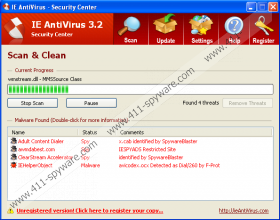