It can be easy to fall for the seditious lies and fake promises of HDD Fix, a harmful and rubbish rogue defragmenter. This rogue pretends to be able to rid PCs from errors and general performance problems, but this is simply untrue. The only motivation behind HDD Fix is to fleece its victims out of their hard earned money, while leaving them with nothing of value in return. Despite what HDD Fix would like its victims to believe, it certainly does not have the ability to fix any errors on the PC, and will cause much more damage than it will do any form of good.

HDD Fix uses a variety of infection tactics to facilitate its unwanted infection of the system. These ranges from using bogus online malware scanners to seditious browser hijacking websites which forcefully redirect users to compromised landing pages that make use of drive-by download tactics to forcefully root the HDD Fix infection into the system.

Once HDD Fix manages to entrench its infection into the PC, it will start its attack against the system. This will usually happen by the rogue initiating a fake system scan which will report on various errors and issues supposedly crippling the user. However, these false results were only designed to panic and frustrate the user into paying for HDD Fix’s worthless software. Do not even do this.

Shortly following the fake system scan the user will find himself presented with various fake system messages in the form of annoying pop up messages. These pop ups do not even make sense, some claiming that the HD is missing. This is obviously not possible, otherwise the user would not be able to use the system at all. This already points to HDD Fix being a fake application. Some of the more popular fake alert pop ups to be on the lookout for include the following:

Critical Error!
Windows was unable to save all the data for the file \System32\496A8300. The data has been lost. This error may be caused by a failure of your computer hardware.

System Restore
The system has been restored after a critical error. Data integrity and hard drive integrity verification required.

HDD Fix will use any infection tactic at its disposal to facilitate its nefarious infiltration of its victims’ PCs. Other symptoms reported from the HDD Fix infection include blocked Internet connections, as well as the user being unable to execute applications on the system. This is done in an effort to prevent the user from running or downloading an application which may be able to detect and remove HDD Fix from the system.

In the interest of protecting your PC against the severe damage this rogue is capable of, erase HDD Fix with the help of a properly updated and genuine security tool.

Download Remover for HDD Fix *
*SpyHunter scanner, published on this site, is intended to be used only as a detection tool. To use the removal functionality, you will need to purchase the full version of SpyHunter. 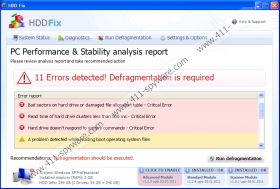