Has a new window with a timer, a ransom note, and frightening images been placed over your Desktop? If so, this is bad news. German Jigsaw .spaß, which is a harmful ransomware infection, has successfully slithered onto your computer and locked your screen together with your personal files. You will remove the window opened by simply killing the process representing the ransomware infection via Task Manager, but we, unfortunately, cannot promise that it will be a piece of cake to unlock encrypted files because they have been encrypted with a strong cipher. Ransomware infections do not lock users’ personal files to make fun of them. There is no doubt that they want users’ money. You should not be one of those users who transfer money cyber criminals demand because there are no guarantees that you will get your files back by sending some Bitcoin to the ransomware author. Since malicious software developers are only interested in revenue, the chances are high that the hacker behind German Jigsaw .spaß will take your money, but you will not get anything from it even if you beg for the decryptor. In other words, your files may stay encrypted no matter what you do. Whatever your final decision is, make sure you delete German Jigsaw .spaß from your system fully – you will find the step-by-step instructions that will help you to erase it right below this article.

As research has shown, German Jigsaw .spaß has been programmed to lock a bunch of different files on users’ computers. It searches for popular filename extensions that belong to documents, pictures, music, and other possibly important data. When a match is found, a file gets encrypted immediately. All encrypted files get the .spaß extension, so it will not take long for you to find out which of your files have been ruined by this ransomware infection. German Jigsaw .spaß not only encrypts personal files on users’ computers, but, as you probably already know if you are reading this report from the beginning, it opens a window. This window contains a ransom note in German. Just like other typical ransomware-type infections, this malicious application instructs victims to send money to the provided Bitcoin address in exchange for the decryption tool. To make sure users do not remove German Jigsaw .spaß the second they find out about its entrance, this threat claims that it will delete 1000 files if the opened window is minimized/closed, or the computer is restarted. Also, it warns users that it will delete some files the first day, 100 files the second day, 1000 files the third day, and later 1 file every hour. It seeks to convince you to make a payment as soon as possible, but you should not send a cent to cyber criminals. There are no guarantees that you will get your files unlocked even if you pay money, so keep it to yourself. Files can be restored from a backup. Also, since there is a free decryptor for the original Jigsaw Ransomware, we suspect that it should be available for German Jigsaw .spaß too or at least it will be released in the near future.

All ransomware infections are distributed similarly. It is very likely that your files have been encrypted by German Jigsaw .spaß because of the opened malicious email attachment. Once this threat infiltrates computers, it copies itself to %LOCALAPPDATA%\Drpbx\drpbx.exe and %LOCALAPPDATA%\Google (x86)\Chrome32.exe. It also creates a Value for Chrome32.exe in order to launch this file automatically on system startup. It means that the only way to get rid of it is to erase all of its components from the system. German Jigsaw .spaß is only one of the hundreds of nasty threats spread via emails, so make sure you are more careful from now on. Additionally, you should install a reputable security tool on your system to prevent threats from entering it illegally.

You need to remove German Jigsaw .spaß to protect your new files. Unfortunately, it does not mean that those files that have already been encrypted will be unlocked when you remove this infection. There are two files you will have to erase to get rid of this malicious application. Also, you will have to eliminate its Value from the system registry. Please use instructions you will find below if you need some guidance.

Download Remover for German Jigsaw .spaß *
*SpyHunter scanner, published on this site, is intended to be used only as a detection tool. To use the removal functionality, you will need to purchase the full version of SpyHunter. 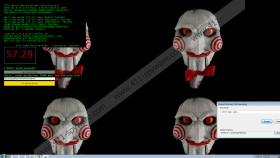