FullVideoConverterPro is a media converter capable of converting the most commonly used audio and video formats. However, it is recommended that you remove this program, because it is considered as potentially unwanted due to its poor converting quality that comes more as an afterthought than anything else. Our tests have shown that this program can display commercial advertisements inside its interface and may even go so far as to open new tab windows featuring promoted websites. So if you have installed this program, then you might want to know more about it. We do not consider this program as malicious. We just want to make you aware that there are far better alternatives to FullVideoConverterPro.

A good way to start dissecting FullVideoConverterPro is addressing the issue of its origins. Apparently, this program’s publisher is called System Manager LLC. We do not know if the same company actually developed this program, but that does not matter as we know that this program has several clones that include MegaPlayer and SpeedVideoPlayer. Its clones were developed by different entities, but they are basically the same program with a facelift. Therefore, it can be said that the provided developer names are fictitious. In any case, FullVideoConverterPro is said to originate from Santa Cruz de Tenerife, Spain, which is also home to another potentially unwanted program called Z-Zip which is a shady file archiver.

Like its counterparts, FullVideoConverterPro is distributed via its very own dedicated website at Fullvideoconverterpro.com. And, like its clones, this program may come bundled with various bad toolbars and adware. The same installer might not install additional content the first time, but might do it the second time you install this converter. So it installs additional software at random. However, this does not make this converter any more reliable.

After you install this media converter you will be taken away by its modern and minimalistic design, but that is how all rushed potentially unwanted programs look like. To be fair, FullVideoConverterPro will convert files, such as MKV, MP4, and AVI. Furthermore, it can customize its conversions for specific devices, such as iPhone, iPad, Android, PSP, and so on. However, the quality of the conversions is not the greatest. In fact, it converts a file so fast, compared to industry-leading programs that it is nothing short of suspicious. Apart from this, there is another problem with this program.

Our research has revealed that FullVideoConverterPro is capable of displaying commercial advertisements inside its interface, but that is not always the case. Nevertheless, this program can affect your browser, and, thus open new tab pages featuring promoted websites. We are of the opinion that those promotional links should not be trusted as they come from unknown sources.

We hope that you found the provided information insightful. As you can see, FullVideoConverterPro is a potentially unwanted program that tries to pass itself off as a media converter. Yes, it can convert, but there are programs that can do it better. Its irritating advertisements that come from unverified sources should also be viewed with suspicion. All things considered, you might want to remove FullVideoConverterPro from your computer, and if you do then go for it.

Download Remover for FullVideoConverterPro *
*SpyHunter scanner, published on this site, is intended to be used only as a detection tool. To use the removal functionality, you will need to purchase the full version of SpyHunter. 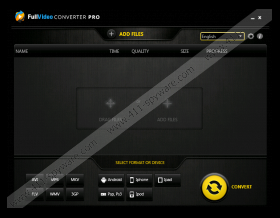 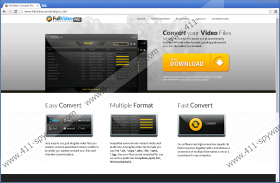