If your operating system suddenly crashes and you are introduced to a strange warning in blue screen via CMD, it is likely that FakeMsMessage has slithered in. This infection might seem scary, but, in reality, it poses little threat. Above everything else, this infection is irritating and disruptive, which is why its removal has to shoot up to the top of your to-do list. It is possible that this infection has entered your operating system bundled with other threats, and their removal also has to be taken seriously. Although not all infections can paralyze your desktop and show false information, other threats can be malicious in other ways. We suggest deleting FakeMsMessage first and then examining your operating system to see if you need to remove other unreliable programs.

FakeMsMessage works in four stages. First, it enters your Windows operating system, and that might be the biggest challenge. Next, it kills the process called “explorer.exe”, as well as the processes of web browsers, to make you think that your operating system has crashed. On the third step, it shows a fake message via a CMD window. Finally, it introduces a misleading pop-up that supposedly asks for a ransom. From what we have seen, FakeMsMessage stops at third step because popup.exe cannot be downloaded due to a server being down. If this server was active, you would have to remove the malicious file from one of two folders – WinKav or Winone – that can be found under %AppData%\local\. In these folders you might find WinoneBat.bat, WinKavApp.exe, and WinoneApp.exe files that also require removal.

There is no denying that ransomware threats can be very dangerous. Ransomware is created to force users into paying money, downloading software, or doing something else that is disadvantageous to them personally. CTB-Locker, Alpha Crypt, TorLocker, and hundreds of other similar threats have proven over time how easy it is for schemers to take money. Fortunately, FakeMsMessage is not as aggressive or as intricate as other ransomware threats, and the damage it does is reversible. Nevertheless, the fact that FakeMsMessage has slithered in shows that your operating system is vulnerable. This means that much more malicious software could slither in if you did nothing to prevent that! If you do not want to encounter malware that you would have to remove again, you have to make sure that all security vulnerabilities and backdoors are patched up.

The removal of FakeMsMessage might seem like a daunting task, but we are sure that you will eliminate this threat successfully using a few simple steps. According to our research, this threat has only one point of execution, and you should have no trouble deleting it from its original folder. Of course, because FakeMsMessage crashes your UI, you might have no clue how to even begin performing the removal. First of all, you have to launch Task Manager. Once you do, you need to kill malicious processes and restore explore.exe. If you are successful – and we are sure that you will be – delete FakeMsMessage files. Finish by installing antimalware software that will help you remove the remaining malware and keep it away in the future.

Download Remover for FakeMsMessage *
*SpyHunter scanner, published on this site, is intended to be used only as a detection tool. To use the removal functionality, you will need to purchase the full version of SpyHunter. 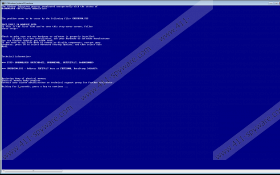