European Cybercrime Centre Virus is a cunning ransomware infection which locks down the computer and presents a misleading warning that bears the emblem of the local police and European Cybercrime Centre, also known as EC3. The institutions vary according to the country which is targeted by the creators of the threat. It has be found out that the warning is produced by the Urausy Trojan, which you should remove immediately after you have found that you cannot use the machine properly.

There are over 20 different variants of European Cybercrime Centre Virus that represent some legal institution of a country. Malware researchers named the variants according to the institutions presented at the top of the notifications. For instance, depending on the country you live in, you may come across Royal Canadian Mounted Police Virus, Politie Nederland Virus, Rikspolisstyrelsen Virus (the Swedish version), and others.

As your money is the ultimate goal of European Cybercrime Centre Virus, you are supposed to pay a release fine via MoneyPak, Ukash, or Paysafecard, according to the bogus notification. Below you will find four excerpts in different languages:

To unblock the computer you must pay the fine through MoneyPak of $300.

We advise you against paying the money as this would be pointless. Disregard the false accusations stating that you have breached some articles; pay no attention to the information about your location and remove European Cybercrime Centre Virus.

Using a powerful spyware removal tool you can easily delete the infection and protect your PC. We urge you to install SpyHunter as this application can terminate the threat and make sure that you can browse the Internet safely.

Download Remover for European Cybercrime Centre Virus *
*SpyHunter scanner, published on this site, is intended to be used only as a detection tool. To use the removal functionality, you will need to purchase the full version of SpyHunter. 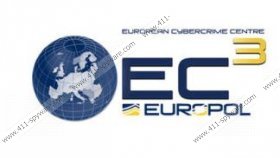