This shining example of programming is called eTranslator. From the very offset, we can say that this program does not perform the functions it claims to perform. We at 411-spyware are of the opinion that users should remove all applications that use deceptive methods to trick users into downloading and installing applications such as this one. Like most adware, it is neatly disguised as a browser extension, and is presented as a translation tool. Note that this application is compatible with the most recent versions of Internet Explorer, Mozilla Firefox, and Google Chrome. eTranslator is considered an unreliable, even a dangerous application that ought to be removed. This article features an analysis of eTranslator regarding what it does and the dangers it might pose.

eTranslator was released on the 1th of January 2015, so it is a fairly knew infection. Some advertisement websites state that it is an online tool designed to ease the workflow between businesses and their translators and become the exclusive way for businesses to outsource their translation projects. It goes on to boast that their “translators” are instantly notified about potential projects via email, they can preview the files to be translated, manage current and future availability schedule, and so on, and so forth. However, our researchers have found that eTranslator does not perform the functions it claims to perform. Thus, we encourage users to remove eTranslator, because it is considered to be a dangerous infection.

eTranslator shows numerous commercial advertisements in the Russian language, but it doesn’t mean that it only affects Russian websites. English, or any other language websites for that matter, might also be injected with advertisements. From a geographical perspective eTranslator mostly infects users residing in Ukraine, Russia and other eastern European countries. However, the US shares 8.62 % of all infections. Russian adware applications are notorious for their malicious content. Users might end up infected with dangerous malware if they click on an eTranslator sponsored ad. Therefore, one should remove it in order to avoid compromising one’s system security.

In conclusion, eTranslator is not a useful translation tool that will ease the workflow between businesses and translators. Our researchers have determined that it does not perform any of the aforementioned functions. Nevertheless, eTranslator is designed to display numerous third-party advertisements that can only be called unreliable and dangerous. Even if some ads are legitimate, there is no excuse not to remove it, because there no way of knowing which ads are legitimate and which are not. Please do not hesitate to remove eTranslator as soon as possible.

How to remove BrickEnforcer from Windows

Download Remover for eTranslator *
*SpyHunter scanner, published on this site, is intended to be used only as a detection tool. To use the removal functionality, you will need to purchase the full version of SpyHunter. 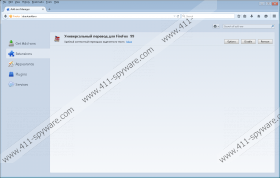 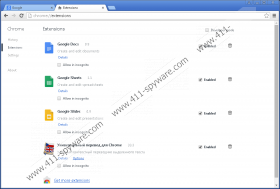