The Eternity ransomware seems threatening judging from its user interface featuring skulls with ugly grimaces. Fortunately, the Eternity ransomware is one of those threats that are created for testing how ransomware works and can be removed from the computer after decrypting files with a decryption key. Like the vast majority of destructive ransomware infections, the Eternity ransomware is capable of encrypting files and displaying a ransom warning, but the key difference between this and other threats is that Eternity encrypts files in a given location, which is the directory, Test, leaving other files on the computer intact. The infection is built by Sameera Madushan Perera, who has used open source code to create this publicly available project for educational purposes. Even though the author claims that Eternity is not aimed for being spread as a virus, someone has taken full advantage of this product.

The Eternity ransomware should be removed from the computer even thought it might not have damaged your valuable files. Ransomware infections stealthily infects protected computers, which means that any other threat might access your PC and may already be present on your computer.

Once on the computer, the Eternity threats scans the system for a targeted directory and encrypts all the files in the folder. In addition, it adds another extension, which is .eTeRnITy. On top of that, the threat plays two audio files. The first file plays an audio informing a victim that different files have just been encrypted, whereas the second file plays a joke. It has also been found that audio files must be in the same folder as the ransomware in order for the ransomware to operate according to plan.

A lot of inexperienced computer users fall victims to ransomware by paying the money required in the ransom warning. Revenues made by ransomware builders have reportedly reached $1 billion. Organizations that are hit by ransomware tend to pay ransoms in the hope of regaining their lost files; however, paying up does not necessarily lead to the unlock of files. Agencies working on ransomware attacks urge people not to pay, and you should be one of the many that do not give in the temptation to pay.

The Eternity ransomware may seriously shock a victim with the sum of $1000 demanded in return to the encrypted data. The sum asked by attackers usually starts around $50–$100 and depends on the attackers' preferences. Payments are asked to be made in Bitcoin, which is a cryptocurrency highly preferred by crooks because of the belief that money transactions are untraceable. Since the Eternity threat does not inflict serious damage, paying up would be an unwise decision. On the whole, the chance of regaining access to files after paying up is close to zero. If you want to prevent data loss, you should protect your files by making their copies to separate storage devices and also shielding the system against different malware threats.

When it comes to the removal of the Eternity ransomware, malware researchers come up with the decryption code of the threat. In case you have found that some files are not accessible because of the Eternity threat, use the following code to unlock them.

After decrypting files, it is crucial to remove the cause of the inconvenience. Below you will find our removal guidelines that should help you find directories containing malicious files. If you find manual removal too complex, you can always rely on reputable antimalware. Your PC could be attacked by Trojans, browser hijackers, adware, and other threats at any time without your knowledge if you keep it unprotected. A reputable security tool would fight off different threats so that you can browse the Internet safely. Do not delay taking action so that no other malicious programs get on your PC without your knowledge.

How to remove the Eternity ransomware

Download Remover for Eternity Ransomware *
*SpyHunter scanner, published on this site, is intended to be used only as a detection tool. To use the removal functionality, you will need to purchase the full version of SpyHunter. 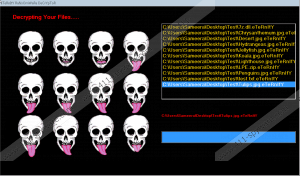 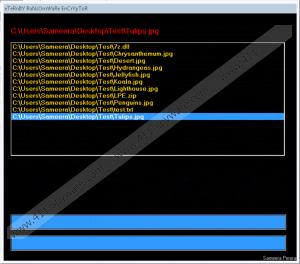