EnyBeny CRISTMAS Ransomware shows a message stating “Great! You a member 2019 New year #Enybeny community.” Afterward, the warning should explain the files on the computer were encrypted with a secure encryption algorithm, and tell what the user has to do if he wishes to restore his data. To be more precise, the victims are asked to pay a ransom. What’s unusual is the sum is tiny and it would take to convince a lot of victims to pay it until the hackers could gather a substantial amount. Consequently, we believe the malicious program’s developers could ask for more money later on. Therefore, we would recommend not to take any chances and ignore EnyBeny CRISTMAS Ransomware’s ransom note. For users who have no intention of paying the ransom, we advise removing the threat with a reliable security tool of their choice or our prepared deletion instructions we will add at the end of this text.

There are a few ways EnyBeny CRISTMAS Ransomware might be distributed. According to our researchers, a possible scenario is it being spread with malicious email attachments, installers, updates, and so on. Meaning, the malware’s launcher could be any recently downloaded file that you obtained from untrustworthy sources. To avoid making such mistakes in the future, we advise downloading installers or other files only from legitimate web pages. As for email attachments, you should not rush to open data received from people you do not know or if it arrives unexpectedly. Especially if the message with the attached file urges you to open it while threatening something terrible could happen otherwise.

Some cybercriminals have other tactics; for example, they send files with titles that would make the user want to have a look at the data. For instance, the malicious launcher could look like a picture, and the title might suggest the targeted victim is in the image. One way or the other the only way to protect your system from such malware is to be cautious and not to open data that raises suspicion. Probably the smartest thing to do besides not downloading files from unreliable sources or opening doubtful email attachments would be to scan such data with a reliable security tool first. The scan may take a couple of moments, but it might prevent you from infecting your computer accidentally.

The moment EnyBeny CRISTMAS Ransomware enters the computer, it should encrypt various private files with a strong encryption algorithm known as AES-128. Our specialists report the threat does not encrypt data located in the Windows, Program Files, and Program Files(x86) directories. Thus, the computer should not crash, and the only reason why the user might notice the malware's appearance is the ransom note it opens after the encryption process. Not to mention, files affected by EnyBeny CRISTMAS Ransomware are supposed to have a unique second extension added at the end of their titles. Getting back to the ransom note, it should be a text file named hack.txt. Inside of it, there should be a message saying the victim can restore encrypted data by contacting the hackers and paying 0.00000001 BTC to their account.

At the moment of writing, 0.00000001 BTC is approximately 0.000038 US dollars. Because the sum looks extremely small we believe there is a chance the hackers could try to trick their victims somehow, for example, they could demand more money after seeing the victim is willing to pay. This is the main reason why we advise against paying the ransom. If you think dealing with the hackers could be hazardous as well, we encourage you to erase EnyBeny CRISTMAS Ransomware and restore files from copies you could have on removable media devices, cloud storage, and so on. To delete it you could use the instructions located below or a reliable antimalware tool of your choice.

Get rid of EnyBeny CRISTMAS Ransomware

Download Remover for EnyBeny CRISTMAS Ransomware *
*SpyHunter scanner, published on this site, is intended to be used only as a detection tool. To use the removal functionality, you will need to purchase the full version of SpyHunter. 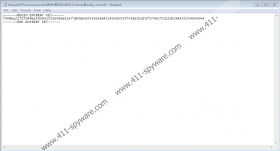 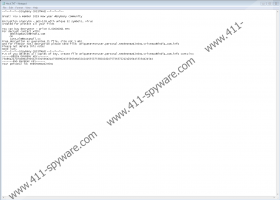