EnyBenied Ransomware is a threat that could make your pictures, documents, and other files useless. The malicious application does so by encrypting the victim’s data with a strong encryption algorithm and marking it with .EnyBenied extension. As a result, the user cannot open it unless he gets a unique decryption key and a tool that only the hackers behind the malware might have. Naturally, to extort their victims, the malicious application’s developers ask to pay a ransom in exchange for the means to restore encrypted files. The sum does not look particularly huge, but we would still not recommend paying it. Despite what the EnyBenied Ransomware’s creators may promise, they might not hold on to their end of the deal. In such a case, the money you transfer would be lost in vain. Consequently, instead of putting up with any demands, we recommend erasing the malware and then restoring data from backup copies you may have.

As usual for ransomware applications, EnyBenied Ransomware could travel with malicious Spam emails. In such a case, the computer would get infected after the user opens an infected email attachment. To avoid such mistakes, we recommend staying away from files that come from unknown sources or at least check such data with reputable security tools before opening it. Also, our specialists believe the malware might be spread with malicious software installers. Thus, users should try to avoid visiting unreliable file-sharing web pages or downloading installers from doubtful banners, pop-ups, etc. The safest way to obtain new software is to download it from legitimate web pages. What we mean is pirated software and unknown freeware applications can be bundled with various threats, and it is wise to avoid them.

Furthermore, it looks like EnyBenied Ransomware does not need to settle in. It runs right from the directory where its installer is launched and starts encrypting the victim’s files soon enough. According to our researchers, the malicious application was programmed to encrypt almost all data found on the computer. The only files the malware might leave untouched should be the data associated with the computer’s operating system. Like many other similar threats, it avoids encrypting such files because it could make the system crash and so the malware would be unable to display a ransom note. In the note, the hackers require their victims to pay a particular sum of Bitcoins in exchange for decryption tools. Despite what they say, in reality, there are no guarantees they will make the right thing and give you the promised decryption tools. On the contrary, they may try to extort even more money from you or simply ignore you. Knowing there is a possibility you could be tricked, we would advise not to deal with EnyBenied Ransomware’s creators, especially if you have backup copies on cloud storage or removable media devices.

To eliminate EnyBenied Ransomware, you could follow the instructions located at the end of this article. They will list the steps you may need to complete to find the malware’s installer and remove it manually. The second option is to get a reliable antimalware tool and scan your computer with it. Then, you should be able to get rid of the ransomware application and other possible threats by pressing the provided deletion button.

Get rid of EnyBenied Ransomware

Download Remover for EnyBenied Ransomware *
*SpyHunter scanner, published on this site, is intended to be used only as a detection tool. To use the removal functionality, you will need to purchase the full version of SpyHunter. 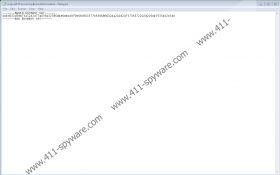 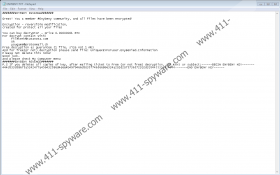