Since the direct download link within the official Dolphin Deals Ads websites does not work, it is safe to assume that the adware application is distributed via bundled software. Mostly bundled software is promoted on suspicious third-party download websites. Often unsuspecting users download installers that are filled with numerous applications. It is advised to always choose advanced installation. This method could allow you to disable the setup of any unwanted applications. You should download your software from official websites only if virtual security is important to you. Official vendors’ websites provide proper information about the provided downloads.

Since Dolphin Deals Ads is a product of SuperWeb LLC – an infamous group that has developed adware applications like Zebar Ads, WebGet, Gerbillio Deals, Zippy Zarp and quite a few others – it works in virtually the same way as it counterparts does. After a successful infiltration, it will install browser extensions to Mozilla Firefox, Internet Explorer, and Google Chrome. Then you will be presented with numerous third-party commercial adverts. These ads are annoying and frustrating to put it mildly. But what is worse is that some of them might contain a redirect link. You could be redirected to a corrupted website setup by malware distributors. Often such websites are implemented with an arbitrary code execution exploit. That means that just by landing on such website you will probably get your system infected with some unknown malware. It is quite obvious why removal of Dolphin Deals Ads is essential if you are keen on keeping your system secure and clean.

How to remove Dolphin Deals Ads

Download Remover for Dolphin Deals Ads *
*SpyHunter scanner, published on this site, is intended to be used only as a detection tool. To use the removal functionality, you will need to purchase the full version of SpyHunter. 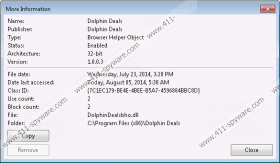 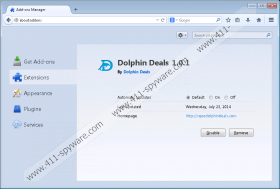