Desktop-play is an adware-type application that apart from being malicious in nature is also of arguably useful functionality. Therefore, we recommend that you remove it. Desktop-play is advertized as an application that will enable you to download computer games free of charge. It is true that all promoted games will be downloaded, but some of them might not work. In general, the quality of the promoted content is rather low as some of the games are installed only with one particular language that is other than English. Nevertheless, the real issue with the application is its ability to display third-party commercial advertisements that can severely jeopardize your system’s security. So, we highly recommend that you delete this infection from your computer as soon as possible.

The application is advertised and can be downloaded from a website, called Desktop-play.com. The developer of the program is still unclear, but oddly enough it is signed by Tuto4PC.com. However, Desktop-play cannot be found on the website itself nor is it mentioned on it. It must be said that Desktop-play is very similar to OneSoftPerDay, MyBestOffersToday, and some other infections that you should definitely remove as well. Note that there is no way of knowing what kind of advertisements you will be subjected to if you do not remove this application from your computer.

As mentioned, Desktop-play is advertised as an application that will allow you to get free games with a click of a button. The interface of the application is a small window that will appear at the bottom right of the screen. You can scroll down through the selection of games and download whichever you like. At present the application features only a handful of games that we will discuss if more detail. Half-life 2 Garry’s mod is probably the most well-known game to be features. However, you will not be able to play it, because it requires a legitimate version of Half-life 2 and Steam. Second game is Plants vs. Zombies, but most of you will be disappointed to know that the game is not in the English language. Desktop-play also includes downloads of 123 Free Solitare, Warcraft III: Frozen Throne, and Pure Sudoku. Testing has revealed that some of the games contain malicious files that might jeopardize your system’s security. So we recommend that you remove Desktop-play because of that as well.

Our researchers have determined that Desktop-play is an unreliable application that is likely to display commercial advertisements. Furthermore, some of the games contain malicious files, which make the whole game unreliable and a potential risk to system security. We recommend that you remove Desktop-play from your computer using our manual removal guide. We also recommend that you get an anti-malware scanner that will protect your computer from infections in the future.

How to remove Desktop-play from the OS

Download Remover for Desktop-play *
*SpyHunter scanner, published on this site, is intended to be used only as a detection tool. To use the removal functionality, you will need to purchase the full version of SpyHunter. 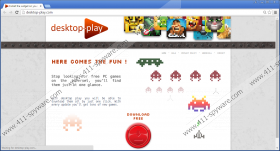