If you are looking for the ultimate defender which is able to protect your computer from malicious applications, then you have to know that Desktop Defender 2010 is not the right choice at all. Although this application seems to be a legitimate and reliable AV tool and promises to detect any threats present on your PC, the truth is that this is a malicious program attacking your computer. The virus imitates the layout and actions of a genuine security tools and thus tries to mislead unsuspecting users into thinking they can rely on the fake program to protect their PCs.

All of a sudden the victim will notice that some unknown application is trying to warn him about numerous threats. The intruder will display a lot of error messages and they will all confirm the existence of many compromised and damaged files. The attacker will pretend that the only way to get out of the troublesome situation is to purchase the full version of Desktop Defender 2010. The fake security software even starts an automated system scan. This scan confirms that there are numerous system errors and infected files, and they all have to be removed immediately to avoid some serious system crash. The truth is that all of the messages are nothing but a trick aimed at scaring you into paying for useless software.

After the intruder has entered the system, it blocks all legitimate security tools to make it impossible for them to warn the user of the PC about the threat. Next, Desktop Defender 2010 makes everything which is possible to trap the user into buying a bogus application. The truth is that this program cannot detect any real threats, as well as it is unable to remove compromised files. It can only produce tricky warnings and give you unreliable security information.

Download Remover for Desktop Defender 2010 *
*SpyHunter scanner, published on this site, is intended to be used only as a detection tool. To use the removal functionality, you will need to purchase the full version of SpyHunter. 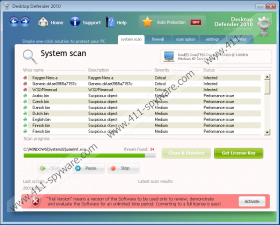