CyboScan PC Optimizer might seem like a great program if you only pay attention to the information presented by its developer. You can find this information at cyboscan.com, and this is where you might have downloaded the suspicious system optimizer from as well. According to the official promotion, the app can resolve issues that are slowing down your PC’s performance, remove unnecessary files (“Log files, Temporary files and Error Reporting files”) to make space, and fix the Windows Registry. Overall, the program seems to be great. Unfortunately, its services are not adequate to the pricing, which is the main reason to get rid of the suspicious program. Have you downloaded it already? If that is the case, we will help you delete CyboScan PC Optimizer. First, read the report to learn why that is recommended. You should definitely read this report if you are thinking about paying for the services of this suspicious, potentially undesirable program (PUP).

Have you downloaded CyboScan PC Optimizer thinking that its services are free? Although the official page presents the “Buy Now” button in a clear manner, it is unlikely that you would be informed about this if you were introduced to the PUP by a third-party installer. You can download the application for free, but it will not do anything until you “Activate” the licensed version called “CyboScan Premium PC Utility.” The free license expires in 7 days, and, after that, you are pushed to pay 99.95 USD. This sum is exceptionally big. Our research team has analyzed and reviewed quite a few inadequate system optimizers (e.g., Reg TuneUp or Privacy Dr), but few of them have demanded sums as big as this one. If you have paid the money already, you have disclosed personal information as well, and that is something you should be most worried about. We suggest contacting the developer of the PUP and asking for a refund, as well as to have all of your personal information removed from their servers. Hopefully, you have not been trapped by this PUP yet.

Although it might seem as if CyboScan PC Optimizer has many tools, in reality, that is just an illusion. In fact, most tools are shortcuts of the Windows built-in tools, which, obviously, is not a feature of the PUP itself. Second, the PUPs ability to clean your registry is questionable as well. Of course, it can remove temp files and certain registry keys, but they are so insignificant that it is unlikely that you would notice any difference in your computer’s performance after their removal. Needless to say, this PUP is incapable of facing serious registry errors and issues. To top it all off, the program boasts of its ability to clear cache, remove browsing history, and erase cookies. Well, you can do that all by yourself for free! Open your browser, tap keys Ctrl+Shift+Delete, and you will be able to clean your browser free-of-charge. Overall, even though CyboScan PC Optimizer is not entirely useless, its services are not that great or useful, and we do not recommend spending a fortune on them. Instead, invest this money in more reliable and useful software.

We strongly advise removing CyboScan PC Optimizer from your Windows operating system without further delay. Although this potentially unwanted program is not classified as a dangerous threat, it is not beneficial, and paying for its services would be a great waste of your savings. If you are investing money, you should invest in your virtual security, and we strongly advise installing anti-malware software. Although it is built to protect your operating system from malware that could try to attack it, it is also capable of getting rid of all active infections. So, if the suspicious CyboScan PC Optimizer came bundled with malware, it will be deleted along with all infections. If you choose to handle them manually, make sure to research them before jumping to the operation. Note that you can eliminate the PUP using the instructions below.

How to delete CyboScan PC Optimizer

Download Remover for CyboScan PC Optimizer *
*SpyHunter scanner, published on this site, is intended to be used only as a detection tool. To use the removal functionality, you will need to purchase the full version of SpyHunter. 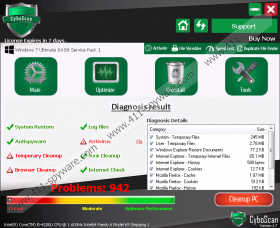 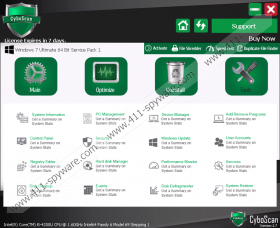