AVC Plus may look like a legitimate computer application, but in reality it is a malicious rogue that enters your system in order to rip you off. These days users can definitely tell when they are infected with malware, so we are sure that you will not be tricked by AVC Plus even though the program looks very reliable. The most important thing is not to panic and remove AVC Plus immediately. The rogue will try to remain on your system for as long as possible, but there is always a way to get rid of it.

When a program pops up into your screen and you do not even remember having installed it, it is the first sign, that the program is suspicious. AVC Plus is very good at making the impression that it is a licensed antivirus application. However, it comes from the notorious Braviax family of fake antivirus applications. AVC Plus is directly related to Zorton Vista Antispyware 2014, Rango Win 7 Antivirus 2014, Sirius Multirogue, and many other infections from the same group. The difference between previously released chameleon rogues and AVC Plus is that the latter does not adjust its name according to your operating system.

However, apart from that AVC Plus functions just like any other rogue from the group. After installation, this rogue performs system configurations that allow it to auto-start with Windows. When AVC Plus loads, it launches a fake system scan. Normally, when rogues run fake system scans, they present users with disturbing search results, using old infection names to scare the unsuspecting user into believing that her computer is severely infected with malware. However, AVC Plus does not even bother doing that. Our research shows that even the virus name it “detects” are fake.

On top of that, AVC Plus blocks all your main programs, players, instant messaging programs, and if you try loading any of these applications, the rogue displays a notification which says that the file you are trying to load is infected with a Trojan or a Worm, so the program has been disabled. AVC Plus urges you to buy a license to activate this program because only AVC Plus can clean all the malicious infections.

Needless to say, the only reason AVC Plus wants you to buy the license is money. When you fill out the purchase form, you enter your credit card details and other financial information that can be exploited later on by cyber criminals. You definitely need to avoid that by removing AVC Plus at once.

It is impossible to launch your web browser in Normal Mode, but you can do that if you load your system in Safe Mode with Networking. Follow the instructions below for each operating system, and remove AVC Plus for good. Do not attempt manual removal if you are not an experienced computer user. It is also for the best to leave malware removal for professionals because by investing in a legitimate antimalware tool, you will also protect your computer from similar threats in the future.

How to remove AVC Plus

Download Remover for AVC Plus *
*SpyHunter scanner, published on this site, is intended to be used only as a detection tool. To use the removal functionality, you will need to purchase the full version of SpyHunter. 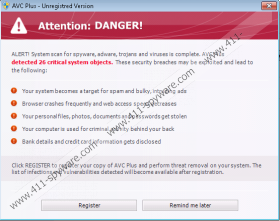 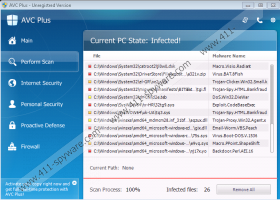 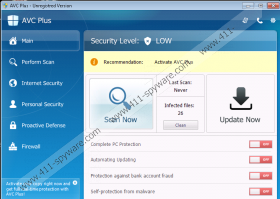