In today’s increasingly hostile and unsafe online world the web is being overrun by rogue antispyware applications like AV Security 2012 that do a good job of emulating genuine security tools. The problem with this is that many PC users are finding it increasingly more difficult to detect fake security tools from genuine and trustworthy applications. AV Security 2012 will enter the system without the user’s permission and will hide its presence from the user. It does not have the ability to detect or quarantine and remove any type of threat from the system, as it is an infection in itself.

AV Security 2012 will use any tactic at its availability to facilitate its surreptitious infiltration of the system. This can range from using bogus online malware scanners to seditious browser hijackers. As of late it has also been reported that AV Security 2012 makes use of infected online flash ads as a part of its online marketing campaign.

Once the rogue manages to securely root itself in the system it will start its attack by initiating a fake security scan of the system. This fake security scan will appear like a legitimate scan as it makes use of genuine and authentic looking graphical user interfaces. It will inform the user that his PC is being overrun by various fake security threats, and that the user needs to pay for AV Security 2012 in order to stave off these attacks.

The rogue will also spam the user with the following falsely generated security threats:

Security Warning
Your computer continues to be infected with harmful viruses. In order to prevent permanent loss of your information and credit card data theft please activate your antivirus software. Click here to enable protection.

Security Warning
Malicious programs that may steal your private information and prevent your system from working properly are detected on your computer.
Click here to clean your PC immediately.

As a further attack on the system AV Security 2012 will prevent the user from running applications on the infected PC, or from establishing an Internet connection. This is done to further panic the user into thinking his system is under attack, but also to prevent him from running or downloading an application which has the ability to detect remove AV Security 2012 from the system.

Other symptoms associated with this threat include certain system folders and their contents being hidden from users, poor system performance and increased erratic system performance. It has also been reported that randomly generated and deleted Desktop items are created in order to confuse the user and any installed security software even further.

You will need to destroy AV Security 2012 immediately in order to regain complete control of your PC and limit the damage this rogue will be able to cause your PC. Do this safely by investing in a properly functioning security tool which will not only erase AV Security 2012 but also protect the system against similar attacks in future.

Download Remover for AV Security 2012 *
*SpyHunter scanner, published on this site, is intended to be used only as a detection tool. To use the removal functionality, you will need to purchase the full version of SpyHunter. 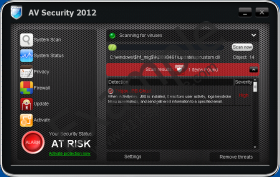