Antivirus XP 2010 is a dangerous computer threat in a sense that it can cause an ultimate system crash and steal your money at the same time. Even though it is called Antivirus XP 2010, there is nothing professional about this application. It is a fake computer security program or the so-called rogue antispyware, that only looks like it can be a reliable computer safeguard program. The truth is that it only imitates an official Windows security suit in order to trick as many users as possible.

The main point of the fraud is to make the user pay for the full version or the “registration” of Antivirus XP 2010. That is done in a very cunning way. When Antivirus XP 2010 infects your system, it automatically springs into action, because the rogue adds up a few entries into your registry that allows it to load together with your Windows. So when it loads, Antivirus XP 2011 performs a fake system scan. Its detection list fills up immediately and it shows you the directory of the infected file and the name of the malware that is supposedly plaguing your computer.

There are a lot of worms, Trojans and viruses in the list and all of them are real, but they DO NOT reside in your computer. Antivirus XP 2010 only wants you to believe so. This list should cause you to panic and then try to remove all of the parasites in one go. Antivirus XP 2010 steps up right there and offers to remove all of them. However, once you click on the Remove button, you are presented with the rogue’s purchase window, because only the registered version (SUPPOSEDLY) is able to get rid of all the threats present.

If a user is desperate enough, he is quick to give away his name, address, credit card information and “buy” the license for Antivirus XP 2010. And bingo, that’s it – this is exactly what the rogue wanted from you and you gave it away on your own free will. Do not fall for this sophisticated trap. Ignore the scan results and the messages that pop up on your screen every other minute. Remove Antivirus XP 2010 from your computer immediately and protect your system against other dangerous threats that might come up barging in some time later.

Download Remover for Antivirus XP 2010 *
*SpyHunter scanner, published on this site, is intended to be used only as a detection tool. To use the removal functionality, you will need to purchase the full version of SpyHunter. 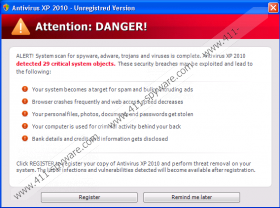 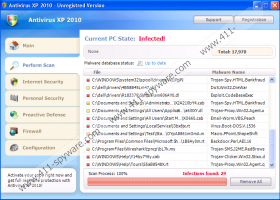