Having Antivirus Studio 2010 in your computer means that there is a bunch of malware installed in your system, and that malware must have downloaded the rogue for you. That is right; Antivirus Studio 2010 is a rogue antispyware application which is distributed to unsuspecting users worldwide by various types of malware. The rogue in question is usually installed through fake online video players. Usually you are redirected to these videos by a spam link in your social networking profile or a blog.

In order to play that video you are required to download a specific codec. However when you click on the download link, the only thing that is downloaded onto your computer is Antivirus Studio 2010. This rogue wastes no time and it installs itself automatically without your knowledge or consent. What is more, it performs certain changes in your system that allows it to load automatically whenever you boot your Windows. And once the program loads it starts doing its nasty job.

Usually, Antivirus Studio 2010 proceeds just like any other rogue that we are familiar with. Its interface pops into your screen and starts performing a fake system scan. At first it might seem that there is nothing suspicious about Antivirus Studio 2010, because due to its design it appears that the rogue is a constituent part of Windows operating system. However, the scan results look more than threatening. Antivirus Studio 2010 “finds” 373 threats and it declares that your system is infected. Then you are encouraged to clean & disinfect your system by getting the license key for Antivirus Studio 2010. Otherwise the rogue would not be “able” to terminate all the viruses it has “found”. It says:

“Trial Version” means a version of the Software to be used only to review, demonstrate and evaluate the Software for an unlimited time period. Converting to a full license is easy!

Of course, it is easy. But it is even easier to lose all of your money by purchasing the license, because that is exactly what Antivirus Studio 2010 wants from you. Were you to buy the full version of this program, your credit card information would be exposed to cyber criminals and they would be able to access your account and steal all of your money.

Ignore the scan results and the following messages:

Warning!
Your computer is being used as spamming machine. You can get sued for spam.
Your computer WILL BE DISCONNECTED FORM INTERNET BECAUSE SPAMMING OTHER PCs

Your computer might be at risk
Antivirus detects viruses, worms, and Trojan horses. They can (and do) destroy data, format your hard disk or can destroy the BIOS. By destroying the BIOS many times you end up buying a new motherboard or if the bios chip is removable then that chip would need replacing.

They are devised to trick you into believing that there is no other way out of this situation but to buy Antivirus Studio 2010 and delete the malware using this program. However, everything is quite the opposite – you need to remove Antivirus Studio 2010 from your computer right now, making sure that no rogues infect your system ever again. Do not hesitate to invest in a reliable antimalware tool if you are not sure how to get rid of the rogue manually. Do everything it takes to clean your computer.

Download Remover for Antivirus Studio 2010 *
*SpyHunter scanner, published on this site, is intended to be used only as a detection tool. To use the removal functionality, you will need to purchase the full version of SpyHunter. 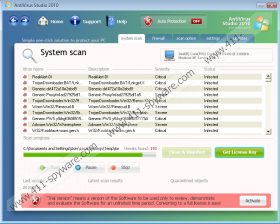