Antivirus Protection is a rogue antispyware application which derives from the same despicable and well-publicized family of roguewares as Antivirus Soft and AV Security Suite. This harmful rogue pretends to be able to protect its victims’ PCs against known and unknown threats. The truth of the matter is that despite what Antivirus Protection would like its victims to believe, it certainly does not have the ability to detect or remove any type of threat from the system.

Shortly after this fake scan the user will find that the system is being spammed with various fake security alerts. These fake alerts were also designed to panic the user into buying Antivirus Protection in a vain effort to protect their PCs. Some of the most popular fake alerts to be on the lookout for reads as follows:

Antivirus Software Alert
Infiltration Alert
Your computer is being attacked by an internet virus. It could be a password-stealing attack, a trojan - dropper or similar.

Antivirus Protection will be responsible for many other symptoms which will ultimately render the system completely inoperable. These vary from increased erratic system behavior, blocked Internet connections and randomly generated and deleted Desktop items. Users also complained about not being able to launch any executable on the infected PC.

In order to secure your PC again and limit the damage this rogue will cause you need to destroy Antivirus Protection. This is safest done by using a properly functioning and genuine security tool.

Download Remover for Antivirus Protection *
*SpyHunter scanner, published on this site, is intended to be used only as a detection tool. To use the removal functionality, you will need to purchase the full version of SpyHunter. 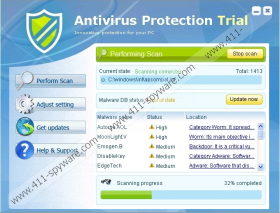