Antivirus .NET is a new version of such rogues as Antivirus Scan and Antivirus Action. As a rogue antispyware application, Antivirus .Net enters your computer without your permission and stages up a very sophisticated act, during which you are forced to believe that your system is infected with multiple threats and Antivirus .NET is the only program out there that can help you in removing them. Unfortunately, that is the main objective of this rogue, and by following its instructions you would face terrible consequences.

Since Antivirus .NET does not need your confirmation to enter your system, it installs itself stealthily whether via Trojan infection or through some fake online malware scanner that you have come across on the Internet and clicked on it accidentally. Antivirus .NET changes the registry settings so that the rogue antispyware would load together with your Windows. As a result, once your computer boots up Antivirus .NET window pops into your screen to perform a fake system scan.

During the “scan” you can see your system directories being “scanned” and malware titles show up one after another in the results list, such as EdgeTech, Win32/Nuqel.E, Win32/Wadnock and so on. Antivirus .NET even provides you with a generic description of these parasites, giving you the category and the main aspects for each infection. Everything would be great, if this list weren’t forged. See that “Activate Now” tab on the left side of the rogue’s interface? Antivirus .NET makes you think you are infected, because it wants you to click on it and give away your banking information.

If that weren’t enough, Antivirus .NET also floods you with a great amount of fake security notifications that should only strengthen the negative effect that the scan results create. Some of the messages are:

Security Warning
Application cannot be executed. The file notepad.exe is infected. Do you want to activate your antivirus software now.

Obviously, there is not need to say that all these messages and the scan results are nothing but blaring lies. These lies are woven in order to extract your credit card number from you. Antivirus .NET is a very dangerous rogue which also damages your computer while it tries to steal your money, so you must remove Antivirus .NET from your system at once. While you’re at it, also make sure that no other rogues would ever infect your computer in the future.

Download Remover for Antivirus.NET *
*SpyHunter scanner, published on this site, is intended to be used only as a detection tool. To use the removal functionality, you will need to purchase the full version of SpyHunter. 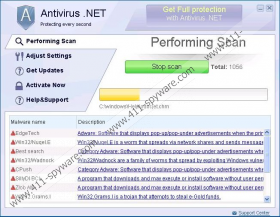