If you are looking for a value added, user friendly and genuine security tool to protect your PC, then you will do well to steer clear of Antivirus 2008. This rogue antispyware application was certainly not designed to offer any type of protection to a PC, and will not relent until it succeeds in ripping you off. This disgusting rogue security tool uses any devious trick at its disposal to fleece money out of its victims, while leaving them with nothing of value in return.

It will enter the system through using various nefarious tactics, which include but is not limited to bogus online malwares scanners and seditious browser hijacking website. In fact, as of late it has also been reported that Antivirus 2008 bundles its Trojans and malware together with other third party downloads.

Users whose PCs were infected with Antivirus 2008 complained about being unable to launch applications on the infected PCs, as well as blocked Internet connections. They also complained about increased volatile and erratic system behavior, and extremely poor system performance.

Antivirus 2008 generates fake system scans and bogus security notifications to warn the user falsely that his system is being attacked, and that by purchasing Antivirus 2008 he will successfully stave off these attacks.

In order to regain control of your PC and limit the damage to your system, destroy Antivirus 2008 as a matter of urgency. This can best be done by using a properly functioning security tool.

Download Remover for Antivirus 2008 *
*SpyHunter scanner, published on this site, is intended to be used only as a detection tool. To use the removal functionality, you will need to purchase the full version of SpyHunter. 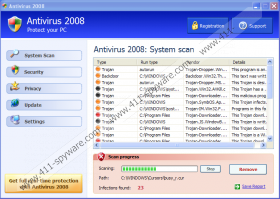