AntiVira Av is a rogue antispyware application that comes forth with a formidable background behind it. It is a new version of such rogues as Antivirus Action, Antivirus Scan and Antivirus .NET, so it means that it can easily trick a lot of unsuspecting computer users and then steal their money without them even realizing it. Financial gain is the only thing that AntiVira Av wants to achieve by being in your computer, so do not have any illusion that his program here could be a useful one.

Rogues like AntiVira Av have many ways to entry your system. Most of the time, this one makes use of browser hijackers, fake online malware scanners and fake video players. In case of fake video players, you encounter them on the internet and they do no allow you to play the video (which does not exist in the first place) unless you download the suggested code. The codec suggested is nothing else but AntiVira Av in disguise, so when you execute the file, you infect your own computer with the rogue. Of course, it doesn’t say exactly that you are infected with a malicious threat, AntiVira Av installs itself in stealth, but it starts working immediately, popping into action and performing a fake system scan.

A fake system scan is a constituent part of any rogue out there, so AntiVira Av is of no exception. During the “scan” the rogue “finds” a lot of viruses in your system such as Zlob Trojan and the like. Even though these parasites are not made up, they are not there in your computer. AntiVira Av only wants you to think like that because it needs to push you into getting full protection. “Full protection” includes you paying for the license of this program and it is more than obvious that if you pay for it, your money will be spent for nothing and your banking information will be exposed to the evil crooks that will soon access your bank account and sweep it clean.

Therefore you must ignore the scan and AntiVira Av in general. The same goes for the messages that you receive from this rogue, such as this one:

Windows Security alert
Windows reports that computer is infected. Antivirus software helps to protect your computer against viruses and other security threats. Click here for the scan your computer. Your system might be at risk now.

You should not “click here for the scan your computer”. This program is an absolute scam, and it has not capability to protect your from anything. It is a serious computer threat and you must remove AntiVira Av from your system at once. If you find manual removal too complicated, you are advised to use a legitimate antispyware tool that will detect and erase Antivira Av along with all of its components for you automatically.

Download Remover for Antivira AV *
*SpyHunter scanner, published on this site, is intended to be used only as a detection tool. To use the removal functionality, you will need to purchase the full version of SpyHunter. 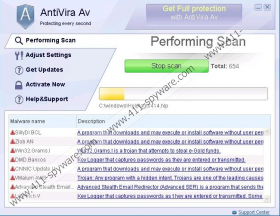