PC owners familiar with the Antivirus Scan rogue application will easily be able to spot the similarities between this scam and its newest clone Antimalware Go. This rogue antispyware application was never designed with the intention of being of any use to a PC, but instead to act as a vehicle to for unscrupulous cyber criminals to rip consumers off. Antimalware Go will enter the system surreptitiously and remain hidden from the user until such time that it is ready to start its attack on the system.

Antimalware Go will do everything in its power to convince the user that it is indeed a legitimate security application, but this does not change the fact that Antimalware Go is a completely ineffectual piece of software unable to protect the system against any type of infection or threat. Antimalware Go will use whatever tactics at its disposal to facilitate its infiltration of the system, which may include making use of fake online malware scanners and seditious browser hijacking websites which will forcefully redirect the user’s browsing and search sessions to compromised landing pages which uses drive-by download tactics to root the Antimalware Go infection into vulnerable PCs.

As a further attack against the system Antimalware Go will spam the user with various fake security alerts in the form of incessant pop up messages. These fake alerts are completely without merit and only developed to panic the user into paying for Antimalware Go’s fake software. Some of the most popular alerts to be on the lookout for include the following:

Antivirus software alert
Infiltration alert
Your computer is being attacked by an Internet virus. It could be password-stealing attack, a trojan-dropper or similar.

What is more, Antimalware Go will configure the infected PC to use a proxy server which in turn will hijack the system’s web browser to display fake warnings when the user attempts to connect to the web. This warning reads as follows:

Internet Explorer Warning - visiting this web site may harm your computer!
Most likely causes:
- The website contains exploits that can launch a malicious code on your computer
- Suspicious network activity detected
- There might be an active spyware running on your computer

Based on all the above evidence it is clear to see that this rogue application has no place on a healthy PC. In order to limit the damage this rogue will cause to your PC, destroy Antimalware Go and restore the system’s security and privacy.

Download Remover for Antimalware Go *
*SpyHunter scanner, published on this site, is intended to be used only as a detection tool. To use the removal functionality, you will need to purchase the full version of SpyHunter. 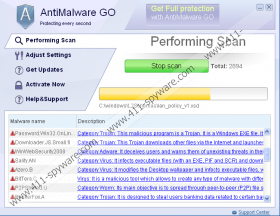