AnimusLocker Ransomware should infect the system after launching a doubtful file received from Spam emails, unreliable web pages, etc. Our specialists say that at that moment the malicious program should crash the Windows Explorer and then restore it later on. It could be that the threat acts this way to stop the user from interfering with the encryption process. As you see, AnimusLocker Ransomware is a file-encrypting infection, which means its primary task is to encipher user’s data to make it useless. Therefore, if your Windows Explorer suddenly crashes after launching a suspicious file, it might be a good idea to unplug the device just in case. However, if the malware already settled in and you are now seeing a ransom note, we would advise you to read the rest of the article and learn more about this malicious program.

Knowing AnimusLocker Ransomware could enter the system through malicious email attachments or other doubtful data downloaded from the Internet, it would be wise to stay away from it. Thus, if you do not want to infect your system with similar threats, it would be best to ignore email attachments coming from unknown sources and forget about downloading software from file-sharing sites that provide pirated programs, unreliable freeware, torrents, etc. Besides, it might be a good idea to acquire a security tool, although make sure you pick a reliable one and keep it up to date so it could recognize even newer threats.

Just like explained in the beginning of this text, the malware should crash the infected computer’s Windows Explorer. As a result, the user should be unable to see the taskbar, icons that were on the Desktop, and so on. Our specialists suspect that AnimusLocker Ransomware does this to make sure the user does not realize what is going on. To be more precise, the malicious program might use the situation to encipher user’s files secretly. The research revealed that the threat is supposed to encipher various photographs, pictures, videos, and other private files created by the user. Furthermore, all affected files can be recognized from the second extension the malware adds to them during the encryption process, e.g., what_to_do_list.txt.animus. Afterward, AnimusLocker Ransomware should scatter copies of text documents called ANIMUS_RESTORE.txt, ANIMUS_RESTORE2.txt, and ANIMUS_RESTORE3.txt among the folders that have encrypted data. These files carry the same message we call ransom note.

The message could start by saying “SORRY! Your files are encrypted.” It looks as if the malicious program’s developers might want to look sympathetic. Nevertheless, as they choose to make a living this way, we honestly doubt these cybercriminals care about their victims’ data. It is important to understand they could tell you anything to make you put up with their demands. As you see, according to the ransom note, malicious program’s developers want to be paid for delivering decryption tools to their victims. The problem is there is a chance they might not keep up to their promise, and in such case, the user could lose his money in vain. For this reason, we always advise against dealing with the cybercriminals. Provided that you think it would be too risky as well, we encourage you to erase the malware.

Users who choose to eliminate AnimusLocker Ransomware have two options. The first one is t try to remove the threat manually. For users who do not know where to start, we have prepared the instructions located at the end of this paragraph. Still, if deleting the malware looks too difficult even with the provided steps, we would recommend employing a reliable security tool instead.

Get rid of AnimusLocker Ransomware

Download Remover for AnimusLocker Ransomware *
*SpyHunter scanner, published on this site, is intended to be used only as a detection tool. To use the removal functionality, you will need to purchase the full version of SpyHunter. 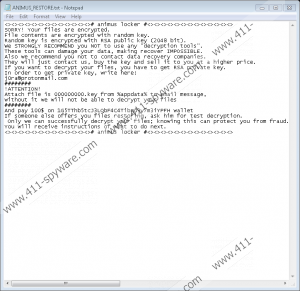 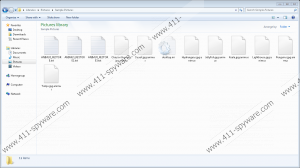