When AKM Antivirus 2010 Pro manages to enter a machine with the help of Trojans, it configures itself to start automatically as soon as Windows starts. Fake scans are its main weapon – it performs them every now and again. They claim to be detecting viruses, but the truth is that the files they list are either non-existing or fake. Then the villain prompts the victim to buy its phony licenced version.

Upon its installation, the rogue carries two executables: AKM Antivirus 2010 Pro.exe and C:\Program Files\svchost.exe. Before you try to remove the rogue, you should stop these two executables; otherwise the program will be launched again.

In addition to the fake scans, the malware also produces a variety of bogus warnings such as:

Warning: Infection is Detected
Windows has found spyware infection on your computer! Click here to update your Windows antivirus software...

svchost.exe has encountered a problem and needs to close. We are sorry for the inconvenience.
If you were in the middle of something, the information you were working on might be lost.
Please tell Microsoft about this problem.
We have created an error report that you can send to us. We will treat this report as confidential and anonymous.

The rogue is also capable of preventing other programs from being launched. It blocks them as soon as the user starts them and shows the following alert:

What is more AKM Antivirus 2010 Pro also evokes counterfeit Windows Security Center alerts that prompt the user to purchase the fraudulent application. Do not trust any of these alerts and scans, but remove the villain immediately via a genuine AV tool.

Download Remover for AKM Antivirus 2010 Pro *
*SpyHunter scanner, published on this site, is intended to be used only as a detection tool. To use the removal functionality, you will need to purchase the full version of SpyHunter. 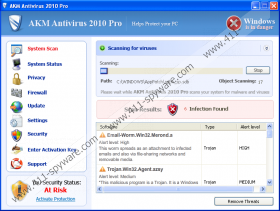