eXPress Antivirus 2009 is one of these annoying programs that pretend to be reliable and useful, but in the end it turns out that they are highly detrimental to your computer. In order words, this new piece of software is a rogue antispyware application that has been created to rip you off unless you manage to get rid of it in time. It is created in a way that if you try to ignore it, it annoys you even more, and if you do not follow eXPress Antivirus 2009’s commands, it damages your computer to the point of no return.

Here are a few examples of malware that eXPress Antivirus 2009 “detects” in your computer: Trojan-Download.Win32.VB.gp, Trojan-PSW.Win32.Gip.107, Trojan-Dropper.MSWord.Lafool.h. All these Trojans are real parasites that have been released by hackers and cyber criminals some time ago. However, it does not mean that they are there in your system. eXPress Antivirus 2009 has the names of these Trojans programmed into its “scan” mechanism, and it will always display them, disregarding the fact whether you really are infected or not.

Along with the scan, eXPress Antivirus 2009 also spams you with fake security alerts. These messages are there to emphasize the scan results and cause you to panic, thinking that your computer security is at risk. Your job right there is to ignore these messages. Do not follow the instructions to remove the viruses when you receive the following pop up:

eXPress Antivirus 2009
WARNING!!!
Last scan detected viruses and Trojans: 420
These infected programms can cuse:
System crash
Permanent: Data Loss
System sturtup failures
Internet connection loss
Infecting other computer on your network
It is highly recommended that you remove all viruses from you computer immediately
To remove these viruses immediately, you need to register EXPRESS ANTIVIRUS 2009
To do so, click Removal all viruses now below.

Instead of registering this poorly made rogue antispyware, that is obvious from numerous spelling mistakes in the message above, you need to remove eXPress Antivirus 2009 right now. Acquire a good antimalware program that will terminate the rogue automatically for you, and you will not need to worry about terrible consequences of this infections were you to leave eXPress Antivirus 2009 in your system. Make sure your computer is clean and no other rogue ever enters it again.

Download Remover for eXpress Antivirus 2009 *
*SpyHunter scanner, published on this site, is intended to be used only as a detection tool. To use the removal functionality, you will need to purchase the full version of SpyHunter. 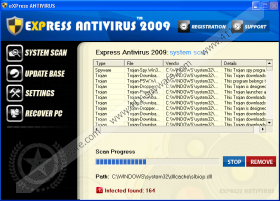