Developers of rogue antispyware applications are becoming increasingly more and more sophisticated in their design and marketing approach of their rogues, as Antivirus 360 is a testament of. This is because in an increasingly more competitive online world, users are getting more educated on the perils of allowing rogue applications to run wild on their PCs. Antivirus 360 does a good job of convincing naïve users of its legitimacy with its well designed graphical user interfaces and legitimate looking fake security alerts.

All of this does not change the fact that Antivirus 360 is not a genuine security tool, and simply does not have the professed abilities it says it does. As is befitting any rogue security application, Antivirus 360 will not seek your permission before surreptitiously infiltrating your PC. This rogue will instead use various deceitful tactics such as bogus online malware scanners and rubbish browser hijackers which employ drive-by download tactics to forcefully root the Antivirus 360 infection into vulnerable PCs.

Once the rogue manages to root itself into the PC it will start its attack by initiating a fake system scan which will start each time the user logs on to Windows. This fake scan will produce bogus results and inform the user that his system is under attack. The problem is that Antivirus 360 will report legitimate Windows files as problematic, and if the user believes the scan results and attempts to delete the supposed afflicted files manually the result will be devastating, and the PC may no longer function correctly. Some of the files Antivirus 360 have been reporting as suspicious include the following crucial Windows files:

Antivirus 360 will also spam the user with fake security alerts in the form of pop up messages, stating that the PC is being attacked and that the user should pay for Antivirus 360 to protect his system. Other symptoms vary from blocked Internet connections and the inability to execute applications on the infected PC. System erratic behavior and poor system performance have also been reported.

You will need to destroy Antivirus 360 and remove it permanently in order to restore your PC’s security. This can safest be achieved by using a properly functioning security tool which will offer adequate protection against future similar attacks.

Download Remover for Antivirus 360 *
*SpyHunter scanner, published on this site, is intended to be used only as a detection tool. To use the removal functionality, you will need to purchase the full version of SpyHunter. 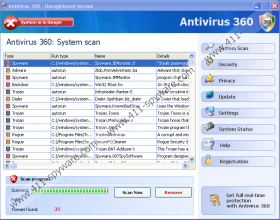