You do not know much about rogue antispyware, or AVASoft Antivirus Professional computer scanner is running on your screen, and you are not sure how to proceed? If yes, this report is for you and if you study carefully, soon enough these worries will be in the past.

AVASoft Antivirus Professional is a member of a well known family of rogue antispywares, which can also be pinned to such disastrous infections as Disk Antivirus Professional. The newest clone is as bad, and if you will not remove it rapidly, cyber crooks will attempt to fool you with a completely imaginary system’s infection. Amongst execution, this rogue will infect your registry, making changes to your PC’s autostart programs, which will allow such devious attributes as fictitious computer scanner and manipulated Task Bar notifications to run without being removed by existing security tools. As this is adjusted, the mentioned scanner will pop-up on your screen reporting Trojans, worms, keyloggers, or any similar infections, which are supposed to intimidate you into thinking that your PC is at serious risk. It is not wrong to be precautious with malware; however, these detections are 100% bogus, as the entire AVASoft Antivirus Professional Virus program is a hoax. It cannot detect or delete malware, and its recommendations for you to purchase the licensed threat removal application are simply meant to drag out your money.

Since everything about the supposed antimalware is fake, you need to remove AVASoft Antivirus Professional components from your system as soon as possible. We highly recommend using automatic removal software, which is the only reliable option to have the virus deleted.

First of all, it would be a wise decision to ignore all the fake security notifications from AVASoft Antivirus Professional, including:

Warning: Your computer is infected
Detected spyware infection!
Click this message to install the last update of security software…

Next, you are advised to register AVASoft Antivirus Professional in order to proceed with the removal as soon as possible. The problem is that the fake AV is able to block a list of executable files in order to prevent itself from being removed. However, you can outsmart the infection by making use of the following activation key:

Once you have registered AVASoft Antivirus Professional Virus you will have some time before the rogue attacks you again. Perform a full system scan with SpyHunter free scanner to see the exact locations of rogue's files, if you want to remove them manually. However, it would be for the best to invest in a computer security application and terminate AVASoft Antivirus Professional automatically, at the same time protecting your system from similar infections in the future.

Download Remover for AVASoft Antivirus Professional *
*SpyHunter scanner, published on this site, is intended to be used only as a detection tool. To use the removal functionality, you will need to purchase the full version of SpyHunter. 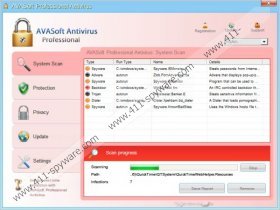 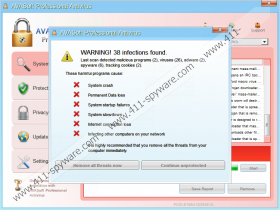 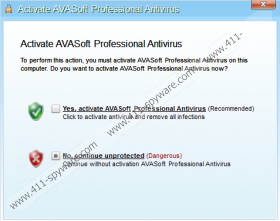