Internet Security 2010 enters the system surreptitiously through the use of browser hijackers, and will remain hidden until such time that it is able to execute its attack against the system. This first clue the user will have as to the presence of Internet Security 2010 on the PC will come in the form of a fake alert which will be displayed even before the user sees his Desktop:

Once the user logs on to Windows, he will also be presented with a fake scan which will inevitably yield bogus results. These fake results are only meant to further scare the user into thinking his PC is under attack, and that he should pay for Internet Security 2010. Shortly after this fake scan, the user will find himself with numerous annoying pop up messages informing him that his system is under attack.

As a further attack against the PC, Internet Security 2010 will prevent the user from launching any type of application on the infected PC. Each time the user attempts to launch an application, he will be presented with the following error message:

Application cannot be executed. The file is infected. Please activate your antivirus software.

The same error will occur each time the user attempts to launch a media player, stating the following:

Restore your PC’s security and remove Internet Security 2010 with the help of a genuine security tool. This is the only way you will be able to regain control of your PC, and restore the system’s good functioning.

Download Remover for Internet Security 2010 *
*SpyHunter scanner, published on this site, is intended to be used only as a detection tool. To use the removal functionality, you will need to purchase the full version of SpyHunter. 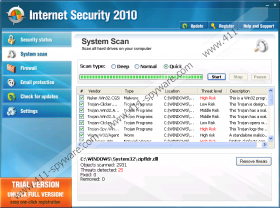