Antivirus Plus 2014 is a deceitful computer application which has been launched recently to deceive unsuspecting computer users into purchasing the so-called full version of the program. The fake AV is part of the FakeRean family, which is also known as Braviax. It includes such malicious threats and System Progressive Protection, Privacy Protection, Antivirus Protection, and many other rogue anti-spyware programs. The sooner you remove Antivirus Plus 2014 from the computer, the soon you can shield the system from various threats.

Like all rogue anti-spyware programs, Antivirus Plus 2014 provides the user with a fake scanner and various misleading pop-up notifications. The goal is to convince the user that the computer is infected with numerous threats, all of which can be supposedly remove by the registered version of the program. The security alerts should be ignored because they do not reflect what the actual state of the operating system is. Here is one of the warnings that you may find in the lower-right corner of the screen:

Antivirus Plus 2014 has detected a leak of your files through the Internet. We strongly recommend that you block the attack immediately.

The pop-up warnings are not the only attempt to encourage the user to activate the program. You are also likely to find the following warning on the interface of program:

Warning
Your PC might be at risk.
Activate the software to protect it. Even thought Antivirus Plus 2014 offers user-friendly interface and free unlimited updates, you should not trust it. You have probably noticed that you cannot access the Internet and launch any computer application, which is caused by the malicious program to make you think that all those Trojan horses and other infections have impaired the system. There is no reason to register the application because it a waste of time and money. Moreover, if you fill in the purchase form with your personal banking details, you risk losing your personal information because it may be used by the criminals in order to perform some other illegal actions.

The fact that the interface of Antivirus Plus 2014 contains icons that are typical of Windows operating systems does not prove that you can trust the application, so do not hesitate to remove it from the PC to see how the condition of the system will change.

We recommend that you implement SpyHunter in order to rid the system of the malicious program and provide the system with the ultimate protection. The application will be eliminated with ease and you will be able to use the machine as usual.

It has been found that Antivirus Plus 2014 does not work in Safe Mode, which means that you can access Safe Mode with Networking and remove the malicious program. Follow the instructions below to eliminate the fake AV.

How to remove Antivirus Plus 2014

Download Remover for Antivirus Plus 2014 *
*SpyHunter scanner, published on this site, is intended to be used only as a detection tool. To use the removal functionality, you will need to purchase the full version of SpyHunter. 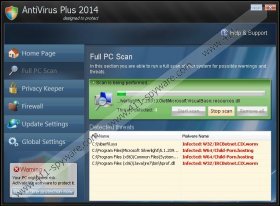 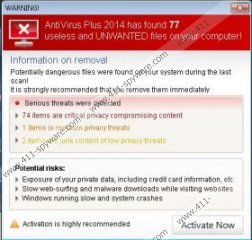 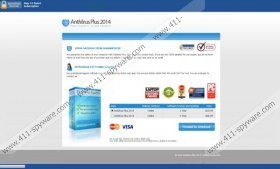