Regardless of its attempts to pass by as a legitimate anti-virus software, WinPC Defender is just one of the numerous rogue anti-spyware programs that try to mislead users into buying their fake licensed versions.

The rogue creeps into vulnerable computers with the help of Trojans, hidden in compromised websites. Once the Trojans settle into the system, they start displaying fake messages and alerts, claiming there are viruses found in the computer. Some of them openly advertise WinPC Defender:

Trojan detected!
A piece of malicious code was found in your system which can replicate itself if no action is taken. Click here to have your system cleaned by WinPC Defender.

Others imply that action should be taken without mentioning the rogue program. If the victim is lured into clicking on such a message, the fake software is automatically installed on the computer. This, however, does not stop the pop-ups – they continue to appear and hamper the user's work. WinPC Defender, in its turn, starts meddling with Internet Explorer's settings and frequently blocks webpages that the user tries to browse, claiming there is a "Threat of virus attack". Even if the victim tries to close the warning and view the desired webpage, he/she is navitaged to WinPC Defender's purchase webpage.

What the rogue has also included in its bag of tricks is a phony scanning tool. It pretends to be scanning the system and, as a result, a list of infections is displayed. WinPC Defender's scans cannot be trusted – the list is preliminary and is the same for any computer on which the rogue operates. Even the full version or also called – licenced version of the rogue, cannot remove viruses, but presents the same list and does not take any action.

To put it in a nutshell, if you come across this program, the wisest thing to do would be to remove it by using legitimate AV software!

Download Remover for WinPC Defender *
*SpyHunter scanner, published on this site, is intended to be used only as a detection tool. To use the removal functionality, you will need to purchase the full version of SpyHunter. 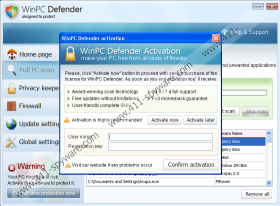