Downloading freeware programs on a regular basis can lead to adware infection, and the likes of TabNav might enter your system without you even realizing it. Truth be told, TabNav is not a genuine computer infection because (just like many other adware programs) it gets installed on a target system with user’s permission, although the user is not aware of that most of the time. Nevertheless, there are particular computer security risks associated with this application, so you would do yourself a favor if you removed TabNav from your computer today.

At the same time having TabNav on-board means that there must be more unwanted applications on your computer as well. If you have no idea how to determine which programs are potentially dangerous and which are safe, scan your computer with the SpyHunter free scanner. A full system scan will help you detect potential security threats, and you will be able to remove them along with TabNav automatically. What’s more, to avoid similar problems in the future, you should stay away from third-party file sharing websites that evidently offer you to download multiple applications for free. Keep in mind that most of the time there is a catch to those “free” applications, and they usually turn out to be adware programs.

TabNav has been developed by the same people as the FlowSurf adware application, and both programs seemingly employ the same distribution network. Apart from being compatible with Google Chrome, Mozilla Firefox, and Internet Explorer, TabNav also has a process that runs in the system background. The process is called abengine.exe, and it can be found on the list of running processes via the Windows Task Manager. The presence of this process means that TabNav connects to the Internet behind your back. The program may download data to update itself or upload the collected information on your web browsing habits to a remote Command & Control center.

On top of that, TabNav may interrupt your web browsing by displaying multiple commercial ads on affiliated websites. Anyone who has dealt with adware before knows that clicking TabNav ads or any other unfamiliar pop-ups for that matter is out of question. Pop-ups displayed by adware applications are not reliable because almost anyone could embed their content into them. TabNav and similar applications do not review the outgoing links.

Thus, having TabNav on your computer makes your web browsing sessions vulnerable to third-party exploitation, and the annoying commercial ads could redirect you to unfamiliar and potentially malicious websites. Thus, you have to remove TabNav from your system right now to prevent severe security issues. Finally, to protect your computer from similar intruders, get yourself a licensed PC security application.

Download Remover for TabNav *
*SpyHunter scanner, published on this site, is intended to be used only as a detection tool. To use the removal functionality, you will need to purchase the full version of SpyHunter. 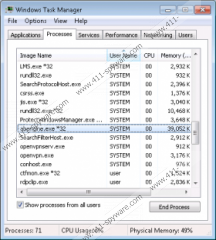 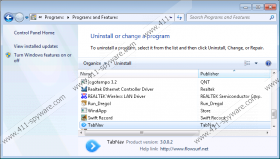