XP Police Antivirus is the name of the rogue AV infecting thousands of computers worldwide. It is not hard to get infected with this threat if you do not run a legitimate anti-spyware software on your PC. Our tests show that the attackers use social-engineering approach to convince users to download a so called "missing codec" in order to watch a certain trendy video. Instead of watching the promised clip, the unsuspecting user unwillingly installs XP Police Antivirus rogue.

XP Police Antivirus uses a well-known method of extortion: it displays annoying pop-ups almost every 5 seconds and it auto-starts fake "security scans". Those scans state that the computer is heavily infected with various malware – Trojans, viruses and worms. Of course, all the results of the XP Police Antivirus scans are made-up, and no one should pay attention to those bogus alerts.

In order not to fall victims to the cyber-crooks again, Internet surfers should follow some simple guidelines: download and install a reliable, legitimate anti-spyware software, run frequent scans for threats, enable the Windows firewall or some 3rd party firewall solution, and always keep all programs up-to-date. The Windows OS itself should be updated with the latest updates too.

Download Remover for XP Police Antivirus *
*SpyHunter scanner, published on this site, is intended to be used only as a detection tool. To use the removal functionality, you will need to purchase the full version of SpyHunter. 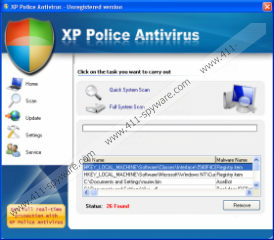