Users are always encouraged to invest in a reliable antispyware application in order to protect their computers from potential threats. However, such programs like XP Antivirus 2014 make use of that, by pretending to be legitimate computer security tools. As you can probably tell, there is nothing beneficial about XP Antivirus 2014. It is a rogue antispyware application that will rip you off without a blink of an eye, if you are gullible enough to give away your personal information to this infection. Naturally, you should avoid such consequences by removing XP Antivirus 2014 from the system immediately.

It is necessary to remain cautious online and exercise safe web browsing habits. Despite the fact that XP Antivirus 2014 does not inform you about the oncoming installation, it is true that users often install this rogue onto their computers themselves. They are simply not aware of that because the rogue often comes bundled with freeware. Sometimes its download might also be initiated after clicking on a random advertisement at a third-party website. Therefore, you should always be careful about what websites you open and what you click on. You can never know where XP Antivirus 2014 is hiding!

Once the rogue enters your system, it will do everything it can to push you into giving away your financial information. XP Antivirus 2014 “scans” your computer and maintains that the system is severely infected with Trojans and worms and that if you want to remove them all, you have to acquire the full version of the program. Obviously, all of the detections are fake – XP Antivirus 2014 simply wants to make some easy money by extorting your sensitive information. What is more, it also blocks you from opening your web browser with the intention to remain on your system as long as possible.

However, you can outsmart XP Antivirus 2014 by entering fake personal information in the rogue’s purchase page. The program is not well-developed enough to recognize real and fake credit card information. XP Antivirus 2014 will automatically “activate” itself, and you will be able to access your programs again. Take note that this fake registration will not last long, so you need to invest in a powerful antispyware application and remove XP Antivirus 2014 automatically.

Manual removal is not recommended unless you are a computer security expert. Should you have any further questions, please leave us a comment below this description.

How to remove XP Antivirus 2014

Download Remover for XP Antivirus 2014 *
*SpyHunter scanner, published on this site, is intended to be used only as a detection tool. To use the removal functionality, you will need to purchase the full version of SpyHunter. 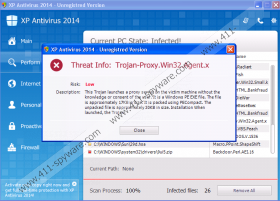 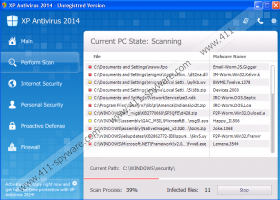 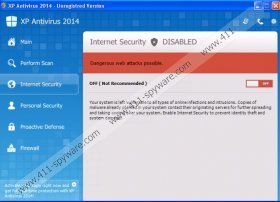