WinSpeeder is yet another adware application that is mostly targeted to avid online shoppers; thus, if you are such a shopper, be careful of this invasive and annoying application. If it is found on your PC, there is only one thing that should be done: removal. WinSpeeder is mostly advertised as a tool that will in some way help you save money and time while shopping online. The publishers promise that you will be shown extremely useful offers and coupons--and that without a doubt sounds tempting. Well, you should know that WinSpeeder is utterly useless and is a hoax application, which will annoy you to no end if you keep this invasive program running on your operating system. Every security conscious user should not have any second thoughts about WinSpeeder; the only rational thing to do regarding this adware is a complete and thorough removal.

Research has revealed that WinSpeeder is mostly distributed via software bundles and that that is the main reason so many users get their operating system infected. Installers filled with dubious applications provide proper information regarding setup processes only if you chose the advanced installation method. Unfortunately, the majority of users tend to skim trough the installation process and end up with numerous third-party unknown applications on their operating system. To avoid infecting your PC in this manner we suggest you not to download any software from any dubious websites. We also firmly advise you to implement a powerful malware detection and removal tool that will detect any virtual threat as soon as possible.

WinSpeeder is an adware application that will annoy you to no end. As soon as it enters your operating system, browsers such as Mozilla Firefox, Internet Explorer, and Google Chrome will be implemented with WinSpeeder browser extensions. Because these extensions are in constant interaction with numerous adware servers, your browser will be flooded with annoying and worthless adverts. Unfortunately, this will make browsing the web an extremely bothersome task. Only after a thorough removal of WinSpeeder is conducted will this annoying activity stop.

The removal is important not only because WinSpeeder is unimaginably annoying. It is also important to note that if WinSpeeder is not removed in a timely manner, your system will be at a risk of exposure to some of the most dubious web content. To put it in simple terms, as long as WinSpeeder is present on your PC, there is a high risk of getting your system infected with some other Internet-based infection. Do not hesitate to remove WinSpeeder using the removal guide that is provided below.

How to remove WinSpeeder from your PC

Download Remover for WinSpeeder *
*SpyHunter scanner, published on this site, is intended to be used only as a detection tool. To use the removal functionality, you will need to purchase the full version of SpyHunter. 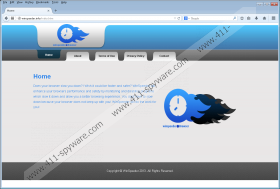