WiniShield is a hackers creation which is advertised as a genuine anti-virus program. In fact, however, it is just one of the numerous rogues roaming free, trying to victimize unsuspecting users.

For those of you, who are familiar with how a rogue operates, this one will be no surprise. It spreads with the help of Trojans, hidden in compromised websites. Most of the times the hacked website does not even look suspicious, but opening it leads to the download of the Trojan.

The first sign of the infection's presence are popups – they appear frequently and display all sorts of frightening messages. Soon after the Trojans enter the system, the rogue is installed without the user's permission or knowledge. WiniShield is then configured to start automatically as soon as Windows starts. The fake warnings do not seize to appear after the installation of the rogue – just the opposite, they flood the system!

The villain also performs made-up scans of the machine to scare the victim even more. They state that the computer is seriously infected and to make itself look legitimate, the rogue even pretends to detect rogue pieces. At the end of each scan, a message is displayed that starts with:

The alert includes a list of frightening tricks that the viruses, which WiniShield has found, may accomplish.

In case WiniShield has managed to sneak into your computer, do not pay attention to any of the scan results or alerts it displays! All of the actions of this rogue are part of its malevolent plan – to make you pay for its phony full version. Though it claims that the full version can remove any virus from your machine, it is a fact, that the program with the name WiniShield is a fraud and should be removed as soon as possible via a legitimate anti-virus software!

Download Remover for WiniShield *
*SpyHunter scanner, published on this site, is intended to be used only as a detection tool. To use the removal functionality, you will need to purchase the full version of SpyHunter. 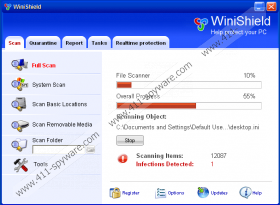