Windows Shielding Utility is a fraudulent computer security program that is there to rip you off. It is a so-called rogue antispyware program that will make you think that your computer is infected with multiple threats and then it will make you pay for a product that does not exist. The fact is that even though your computer might seem to be under attack it is actually plagued by nothing else but Windows Shielding Utility. This rogue spams you with a huge amount of annoying fake security messages, not allowing you to operate your computer properly.

Were you to allow Windows Shielding Utility to stay in your computer for a longer period of time, it can actually slow down your system to the point that it can you will no longer be able to operate. The truth is that Windows Shielding Utility can easily block your internet access with intention to keep you from acquiring information on rogue removal. The rogue is also able to block your executables under a pretense that your program is infected with malware and needs to be closed to prevent the spread of the infection.

Windows Shielding Utility belongs to the Rogue.VirusDoctor family of dangerous computer threats. You might have encountered previous versions of this rogue already, such as Windows Software Saver, Windows Antihazard Helper, Windows AntiHazard Center and others. These rogues and Windows Shielding Utility copies the layout of Windows XP Explorer and it makes the rogue look as a legitimate part of the operating system.

When Windows Shielding Utility gets onto your computer, it performs a fake system scan and presents you with disturbing results saying that there are a lot of "viruses" in your computer. It also floods you with fake security notifications that keep popping up every now and then:

Download Remover for Windows Shielding Utility *
*SpyHunter scanner, published on this site, is intended to be used only as a detection tool. To use the removal functionality, you will need to purchase the full version of SpyHunter. 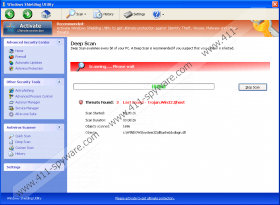