You might think that Windows Advanced User Patch, clone of Windows Internet Booster, is a real, Windows security guarding application, which can remove serious system risks, but you are very wrong! This antispyware tool could not be more fake, since it does not have any competence to delete malware or shield your system, like real security software could. Windows Advanced User Patch can resemble an application, which does have such abilities, because of a professionally designed interface and its seemingly helpful controls. So, if you take into account that this security tool is so cunning and can be used to profit from you unlawfully, you will understand why you have to remove Windows Advanced User Patch from your computer, without contemplating the matter any further.

Windows Internet Booster is not the only predecessor or Windows Advanced User Patch. Windows Crucial Scanner and Windows Foolproof Protector could also be named among other forerunners. In fact, the list of the rogues from this Rogue.VirusDoctor family is so long it would take up half of this description just to innumerate them all. It shows how resilient to removal this family is, and just how dangerous Windows Advanced User Patch might be.

Take, for example, the fact that in order to remain in your system no matter what Windows Advanced User Patch meddles with your Internet browser. Whenever you try to load the Internet, the rogue pops up a table that says Firewall has blocked the program from accessing the Internet, because your browser is suspected to have infected your PC. Come again?

The claim is absolutely absurd, but that does not stop Windows Advanced User Patch from denying access to your browser and a few other programs, including Registry Editor and Task Manager. On the outside it does seem like the rogue is trying to protect you, but in reality it only knowingly disables tools that might aid you in removing it.

Warning! Spambot detected!
Attention! A spambot sending viruses from your e-mail has been detected on your PC.

If you want these and many other fake security notifications to be gone forever you need to remove Windows Advanced User Patch. Make this process a lot easier for you by "activating" the rogue with the following key:

Download Remover for Windows Advanced User Patch *
*SpyHunter scanner, published on this site, is intended to be used only as a detection tool. To use the removal functionality, you will need to purchase the full version of SpyHunter. 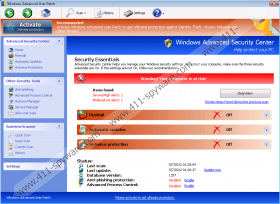 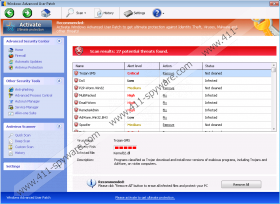 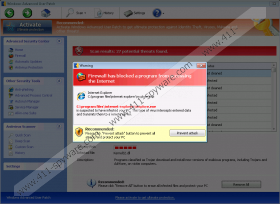